Aliens May Be Closer Than We Ever Thought! 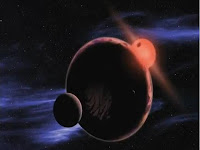 Aliens may be closer than we ever thought. Recent data from NASA's Kepler space telescope suggests that billions of Earth-like planets are much closer than ever before imagined.

While we don't know if intelligent life exists on any of these planets, it raises the chances of that possibility.

The scientific team studied the huge number of red dwarf stars in our galaxy -- stars that are smaller and have a longer life span than our own sun.

Just doing the math, the odds of Earth-like planets in our galaxy are, well, astronomical.

Scientists estimate 6 percent of the 75 billion red dwarf stars may have Earth-size planets orbiting them at a possible habitable distance. That works out to approximately 4.5 billion Earths out there.

"The information we presented today will excite the general public because we now know that the nearest potentially Earth-like world is likely within 13 light years of the sun,"

Thus we would never know whether or not we were truly alone,"

The single greatest question in all of science is 'Are we alone?' The announcement today moves the ball downfield significantly toward answering this question.

But if it is proved that we are not alone, then advanced extraterrestrial life may be beyond human comprehension!

Our 4.5 billion-year old Solar System exits in a universe that is estimated to be between 13.5 and 14 billion years old. Experts believe that there could be advanced civilizations out there that have existed for 1.8 gigayears (one gigayear = one billion years).

Lord Martin Rees, a leading cosmologist and astrophysicist who is the president of Britain’s Royal Society and astronomer to the Queen of England. has said that he believes the existence of extra terrestrial life may be beyond human understanding.

“They could be staring us in the face and we just don’t recognize them. The problem is that we’re looking for something very much like us, assuming that they at least have something like the same mathematics and technology."

“I suspect there could be life and intelligence out there in forms we can’t conceive. Just as a chimpanzee can’t understand quantum theory, it could be there as aspects of reality that are beyond the capacity of our brains.” Lord Rees made ​​his comments in January 2010 during the first conference of the Royal Society about the possibility of extraterrestrial life.