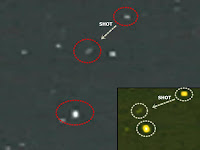 For the record even though this upload date says 16th Feb. I believe this was pre recorded for release today to cover up the fact it was going to be destroyed and they needed the footage to release at a later date to make the cover up complete.

I do not think they realized the last 2 seconds showed their blunder.

I believe NASA filmed itself trying to hit the asteroid but failed the first time around.

Besides, if it was a natural celestial event then why did NASA cut the feed!!