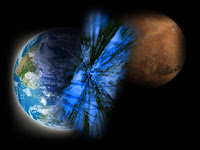 Despite the fact that there's no physical evidence that corroborates the claims of Al Bielek, Preston Nichols, Andrew Basiago and Laura M. Eisenhower, and others, that US military has developed secret programs on space-time travel, since the '40s, but the video below, 'a smoking-gun whistleblower' cause the persons you will hear and see now, have done astonishing revealings about this subject.

Listen carefully what Cernan is saying after 8.00 minutes of video. You think it may be a slip, it is very doubtful..

Actually Cernan says that Buzz Aldrin already was in Mars and would like to go back there. Unintentional words that may confirm the existence of the Project Pegasus.

Project Pegasus is a quest begun in 1968 by Andrew D. Basiago when he was serving as a child participant in the US time-space exploration program, Project Pegasus.

Project Pegasus was the classified, defense-related research and development program under the Defense Advanced Research Projects Agency (DARPA) in which the US defense-technical community achieved time travel on behalf of the US government.

Project Pegasus was launched by the US government to perform "remote sensing in time" so that reliable information about past and future events could be provided to the US President, intelligence community, and military. It was expected that the 140 American schoolchildren secretly enrolled in Project Pegasus would continue to be involved in time travel when they grew up and went on to serve as America's first generation of "chrononauts."

The children found, however, that in the process of serving as child time travelers attached to Project Pegasus, they became America's time-space pioneers.

According to Mr. Basiago and Mr. Stillings, in Summer 1980 they attended a three-week factual seminar about Mars to prepare them for trips that were then later taken to Mars via teleportation. The course was taught by remote viewing pioneer Major Ed Dames, who was then serving as a scientific and technical intelligence officer for the U.S. Army. It was held at The College of the Siskiyous, a small college near Mt. Shasta in California. They state that ten teenagers were enrolled in the Mars training program., including Regina Dugan, who Mr. Obama appointed the 19th director and first female director of the Defense Advanced Research Projects Agency (DARPA) in 2009.

As many as seven parents of the ten students, all with ties to the CIA, audited the class. They included Raymond F. Basiago, an engineer for The Ralph M. Parsons Company who was the chief technical liaison between Parsons and the CIA on Tesla-based teleportation; Thomas Stillings, an operations analyst for the Lockheed Corporation who had served with the Office of Naval Intelligence.

From 1981 to 1983, the young attendees then went on to teleport to Mars via a “jump room” located in a building occupied by Hughes Aircraft at 999 N. Sepulveda Boulevard in El Segundo, California, adjacent to the Los Angeles International Airport (LAX).

Mr. Basiago states that in the early 1980’s, when they went, the U.S. facilities on Mars were rudimentary and resembled the construction phase of a rural mining project. While there was some infrastructure supporting the jump rooms on Mars, there were no base-like buildings like the U.S. base on Mars first revealed publicly by Command Sgt. Major Robert Dean at the European Exopolitics Summit in Barcelona, Spain in 2009.

The primitive conditions that they encountered on Mars might explain the high level of danger involved. Mr. Basiago and Mr. Stillings agree that Major Dames stated  during their training class at The College of the Siskiyous in 1980: “Of the 97,000 individuals that we have thus far sent to Mars, only 7,000 have survived there after five years.”

1980: U.S. secret Mars teleportation program and rudimentary facilities on Mars.The firsthand, eyewitness testimony of Mr. Basiago and Mr. Stillings as to the existence of a secret U.S. presence on Mars that is made possible by a revolutionary “jump room” technology that has been concealed from the public is congruent with similar accounts given by three other Mars whistle blowers:

1. Former U.S. serviceman Michael Relfe, who spent 20 years as a member of the permanent security staff of a U.S. facility on Mars;
2. Former Department of Defense (DoD) scientist Arthur Neumann, aka Henry Deacon, who has testified publicly that he teleported to a U.S. facility on Mars for DoD project meetings. You may like also a further update from Henry Deacon
3. Laura Magdalene Eisenhower, great-granddaughter of U.S. President Dwight D. Eisenhower, who in 2007 refused a covert attempt to recruit her into what was described  to her as a secret U.S. colony on Mars.

Enlarged pictures taken from a photograph taken by Curiosity on November 26, 2012 NASA.gov/images/rocknest (Curiosity's view from "Rocknest" looking eastwards toward "Point Lake" on the way to "glenelg Intrique".) 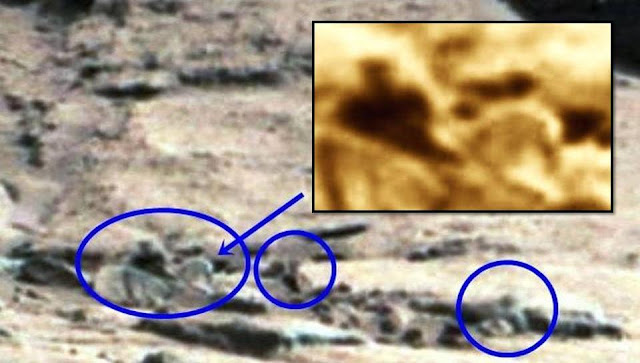