March 01, 2013
Kongka La is the low ridge pass in the Himalayas. It is in the disputed India-China border area in Ladakh. The Chinese held northeastern part is known as Aksai Chin and Indian South West is known as Ladakh.

The area is one of the least accessed areas in the world and by agreement the two countries do not patrol this part of the border.

But there is something much more serious happening in this area. Kongka La is experiencing some strange phenomenon and suspicious objects coming out of the inaccessible huge mountains (Himalayas).

The region is almost uninhabited, has no permanent settlements, and receives little precipitation as the Himalayas and the Karakoram block the rains from the Indian monsoon. This is the region where the Euresian plate and the Indian plate have created convergent plate boundaries. Convergent plate boundaries are formed where one plate dives under another. Consequently, this is one of the very few areas in the world where the depth of the earth's crust twice as thick as in other places. It is perfect for the creation of underground bases very deep into the tectonic plates.

In 2004, a UFO sighting was reported in the Lahaul-Spiti region of Himachal Pradesh, south of Ladakh by a five-member expedition of geologists and glaciologists led by Dr Anil Kulkarni of the ISRO's Space Applications Centre at Ahmedabad. They had filmed a four-foot tall 'robot-like' figure, that 'walked' along the mountain ridge, took off vertically and disappeared in the sky when excited scientists moved closer. 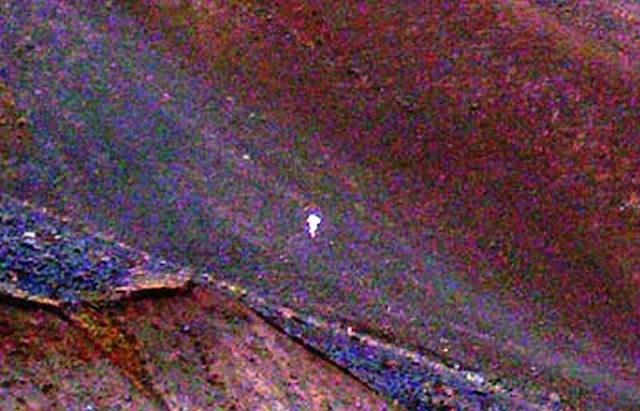 Between August 1 and October 15, 2012, The Indian Army and Indo-Tibetan Border Police Force (ITBP) have reported unidentified flying objects (UFOs) in the Ladakh region of Jammu and Kashmir. An ITBP unit based in Thakung, close to the Pangong Tso Lake, reported over 100 sightings of luminous objects. 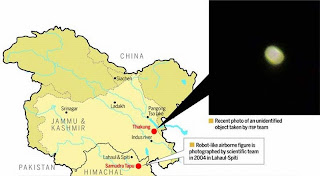 In September 2012, the army moved a mobile ground-based radar unit and a spectrum analyzer - that picks up frequencies emitted from any object - to a mountaintop near the 160-km-long, ribbon-shaped Pangong Lake that lies between India and China.

The radar could not detect the object that was being tracked visually, indicating it was non-metallic. The spectrum analyzer could not detect any signals being emitted from them. The army also flew a reconnaissance drone in the direction of the floating object, but it proved a futile exercise. The drone reached its maximum altitude but lost sight of the floating object.

A team of astronomers from the Indian Astronomical Observatory at Hanle, 150 km south of the lake, studied the airborne phenomena for three days. The team spotted the flying objects, army officials say, but could not conclusively establish what they were. They did, however, say that the objects were "non-celestial" and ruled out meteors and planets.

UFO base area along an earth grid line?

It’s remarkable that this UFO area is right along a very strong grid line. Is there a connection between the locations of reported UFO sightings and the latitude lines that divide the Earth into a grid?

Is gravity a manifestation of energy from the Earth, connected with the Grid? If so, can they use certain points on the Grid to master gravity? Are UFOs defying the Earth's gravity field, using some sort of anti-gravity?

Bruce Cathie a former pilot has observed the UFO phenomena for many years. Bruce Cathie “Verified sighting reports came to hand and I plotted on a map the precise positions of the sightings, and not to my surprise found that invariably the UFO positions fell with uncanny precision on the grid's lines of longitude or latitude - never in the intervening spaces”. The energy Grid and UFOs 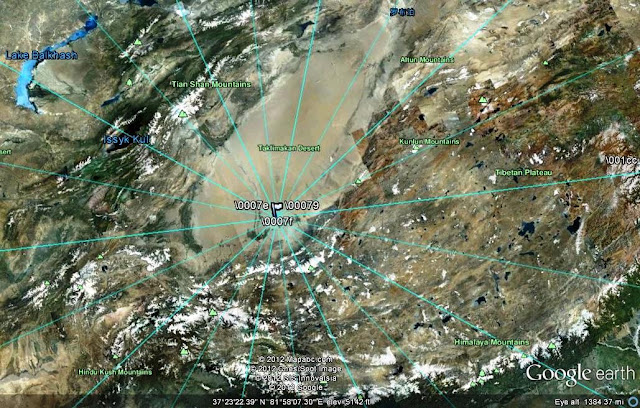 We may assume that multiple UFO bases exist in the 'Kongka La pass' area and in Aksai Chin, the Chinese controlled part of Kashmir. The bases extend from India's Ladack to China's Aksai Chin. That the sightings are real and that there is a strong indication that earth’s energy lines may play a role related to all the unexplained UFO sightings in this area. Source: indiatvnews