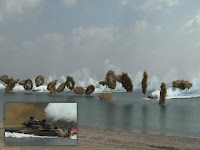 Marines from US and South Korea forces held a combined joint landing operation in Pohang, South Korea as part of the ongoing South Korea-US joint Foal Eagle exercise which North Korea has been strongly denouncing, calling it a war practice drill. Around 1,500 US and 2,000 South Korean participants from across the nations' forces joined the drill.


On an anniversary known for military showmanship, North Korean generals on Thursday declared that their forces were ready to launch intercontinental ballistic missiles and kamikazelike nuclear attacks at the United States if threatened.

“Stalwart pilots, once given a sortie order, will load nuclear bombs, instead of fuel for return, and storm enemy strongholds to blow them up,” the North’s official Korean Central News Agency quoted its Air and Anti-Air Force commander, Ri Pyong-chol, as saying during a ceremony in observance of the anniversary of the founding of the North Korean People’s Army.

Another general, Kim Rak-gyom, the Strategic Rocket Force commander, reiterated the claim that the North is “one click away from pushing the launch button.”

“If the U.S. imperialists and their followers dare make a pre-emptive attack, they will be made to keenly realize what a real nuclear war and real retaliatory blows are like,” he said. Read more