The Vatican's Astonishing Plan for the Arrival of An Alien Savior 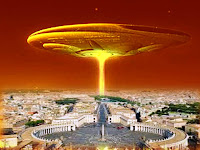 The resignation of Pope Benedict XVI, a historical event, was predicted by the writers Thomas Horn and Cris Putnam in their 2012 best-seller Petrus Romanus: The Final Pope Is Here.

Following the release of their 2012 best-seller, Tom Horn and Cris Putnam were inundated with invitations from around the world to be interviewed on radio, television and History Channel.

Including invitations to Rome to discuss with Italian media their findings on René Thibaut (a Belgian Jesuit whose meticulous analysis of the Prophecy of the Popes predicted the arrival of Petrus Romanus in this era).

In that case it would mean that Francis is the last pope.

During an episode of Omega Man Radio the authors spokes about an 'extraterrestrial' connection between Peter the Roman, the Vatican and the Mount Graham International Observatory in Arizona.

The research of the authors is based on interviews with Catholic researchers and scientists who were willing to speak about the Prophecy of the Popes and the possibility of extraterrestrial life.

Their findings were far more disturbing than they expected to find.

The authors uncovered The Collins Elite, Occultism, and a covert breeding and hybridization program, the Vatican's astonishing exo-theological plan for the arrival of an alien savior and they were given insight in files in the Vatican library on the reality of the alien presence and a private document detailing the Vatican's position on the extraterrestrials.

Finally, according to the authors, 2013 will be the year that top astronomers will reveal the truth about the alien world and its inhabitants.


Exo-Vaticana: Petrus Romanus, Project LUCIFER, and the Vatican's astonishing exo-theological plan for the arrival of an alien savior