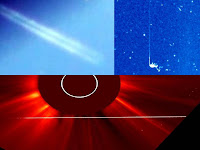 Solar activity will continue to increase as the solar cycle progresses toward solar maximum, expected in the 2013 time frame.

Despite 4 X-solar flares last month and a M5.9 solar flare on June 7, the sun shows little activity at the moment.

The sunspot number may be low, but the sun is far from blank. Amateur astronomers monitoring the sun report a large number of magnetic filaments snaking across the solar disk.

Weird filaments are popping up all over the solar surface and each one has a unique shape and length.

The longest one, in the sun's southern hemisphere stretches, more than 400,000 km from end to end.

If any of the filaments collapses, it could hit the stellar surface and explode, producing a Hyder flare.

The two videos show remarkable and strange activities and unknown objects around the sun which may be related to the increased number of magnetic filaments. The recordings show activities of the past two weeks.

NASA is now predicting that the Sun may generate unprecedented solar storms for a lengthy period in 2013.

Calm before the ‘solar’ storm?