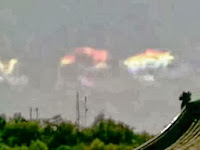 A study, published in the January/February issue of Seismological Research Letters, pulls together several strands of research to propose a mechanism by which earthquake lights form.

Mysterious glows sometimes reported before or during seismic shaking — finds that they happen most often in geological rift environments, where the ground is pulling apart.

The authors suggest that, during an earthquake, the stress of rocks grinding against each other generates electric charges, which travel upwards along the nearly vertical geological faults that are common in rift zones. When the charges reach Earth's surface and interact with the atmosphere, they create a glow.

Images above and left: Sichuan, China - 2008. Earthquake lights 30 minutes before the earthquake.

Of the 65 earthquakes studied, 56 occurred along an active or ancient rift zone. And 63 of the 65 quakes took place where the geological faults that ruptured were almost vertical — as opposed to the shallower angles that many major faults take

Certain types of earthquakes in certain areas can set off blazes of light seconds, sometimes days, ahead of the actual quake. These can manifest themselves as floating balls of light, bluish columns shooting up out of the earth and even reverse lightning, reaching up into the sky from the ground. 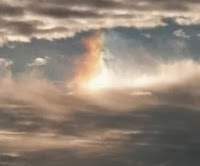 Some witnesses improbably describe flames and smoke spurting out of the ground; others mention glowing clouds that could be an aurora, or streaks of heavenly fire that could be meteors.

In 1727, for instance, a New England man walking his dog one October evening felt the ground start to shake and watched a ball of light roll onto the animal, which yelped.

Near Ebingen, Germany, in November 1911, a woman reported seeing glows that moved along the ground “like snakes” as a quake began.

Off the Peruvian coast in August 2007, a fisherman reported the sky turning violet a few minutes before the sea began shaking.

And a bizarre colorful Earthquake light in the sky was observed about 30 mins before the May 12, 2008 Sichuan earthquake took place. This was recorded in Tianshui, Gansu province 450km northeast of epicenter. (Video below.)

Earthquake lights could raise awareness about them as a possible quake warning. source