Ta-Wer aka Osiris aka CERN 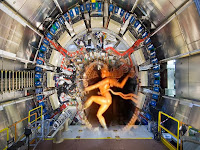 According to researcher William Henry, the ancient Egyptian object named Ta-Wer aka “Osiris” device, was a stargate machine capable to open wormholes or dimensional openings used by Seth and Osiris to “travel across the underworld.”

Is CERN the new “Osiris Ta-Wer”? A modern stargate machine based on ancient technology?

When work at CERN's Large Hadron Collider is completed in 2015, the collider should have twice the power and be able to help unlock more of the universe's mysteries and to explore an entirely new realm of physics.

With the LHC power doubled, they will start looking for what they think is out there and they hope that something will turn up that no one had ever thought of.

It is known that the secret societies are obsessed with the raising of Osiris and maybe they already know what they are looking for and was the placement of a Shiva Statue outside the CERN Hadron Collider a hint?

A group of Portuquese students of the Santa Cecilia Music Academy took images of odd panels within the CERN building with ancient writings, most of them in Sanskrit language.

Is there some occult ritual being carried within the LHC facility and is Shiva the one they are attempting to bring to Earth?

Humankind's fascination with time travel dates back thousands of years. The Mahabharata, from Hindu mythology, is the first, dating between 700 BCE to 300 CE.

Is time travel a reality?

According to Stephen Hawking: “ bending space-time is theoretically possible— by exploiting black holes, or wormholes if they exist, or by traveling at super speeds, based on Einstein’s theory of relativity.”

And according to Vice.com, recently, researchers from Michigan Technological University's physics department jumped on the wagon and decided to use the internet and searched the web through search engines, social media, and popular websites for prescient messages that could be evidence of time travelers.

Despite they didn't find any, it doesn't disprove time travel. They plan to keep looking, according to the study recently published on Arxiv.

Although many people believe that time travel is science fiction, it is not, and taking into account the obsession of the illuminati to use CERN as a stargate machine, it may be possible in the near future, we will face God’s miracles as seen by the ancient Hindu people when their Gods travelling through stargate devices.