Here is a composition image of several wheel damaging. 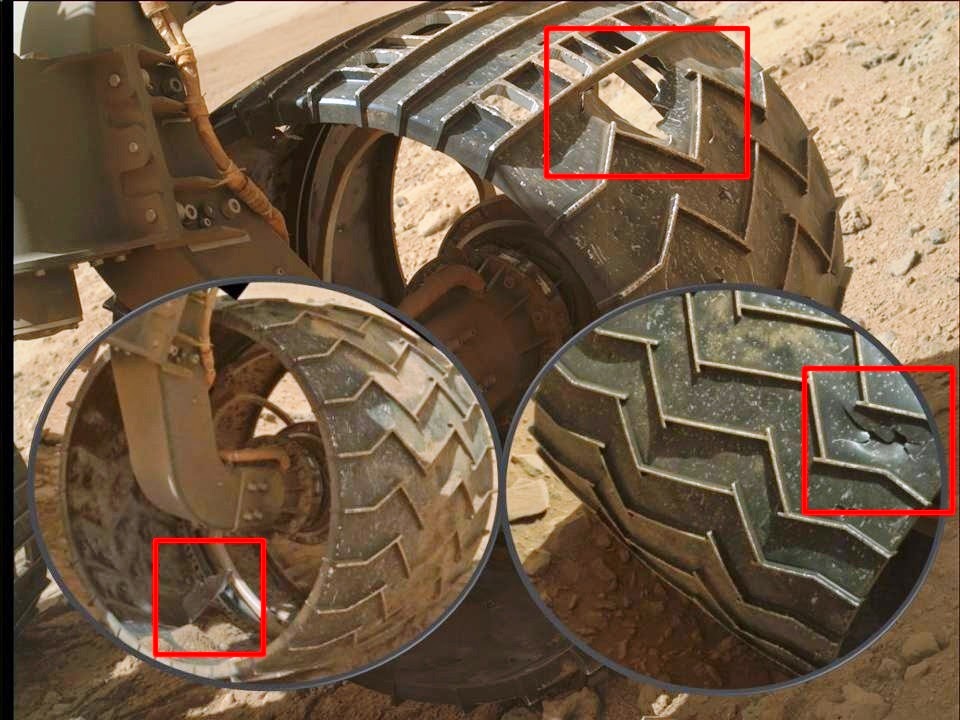 But it is not only wheel damage, newly received images taken by the Curiosity on June 8, 2014, show also other broken parts of the Rover. 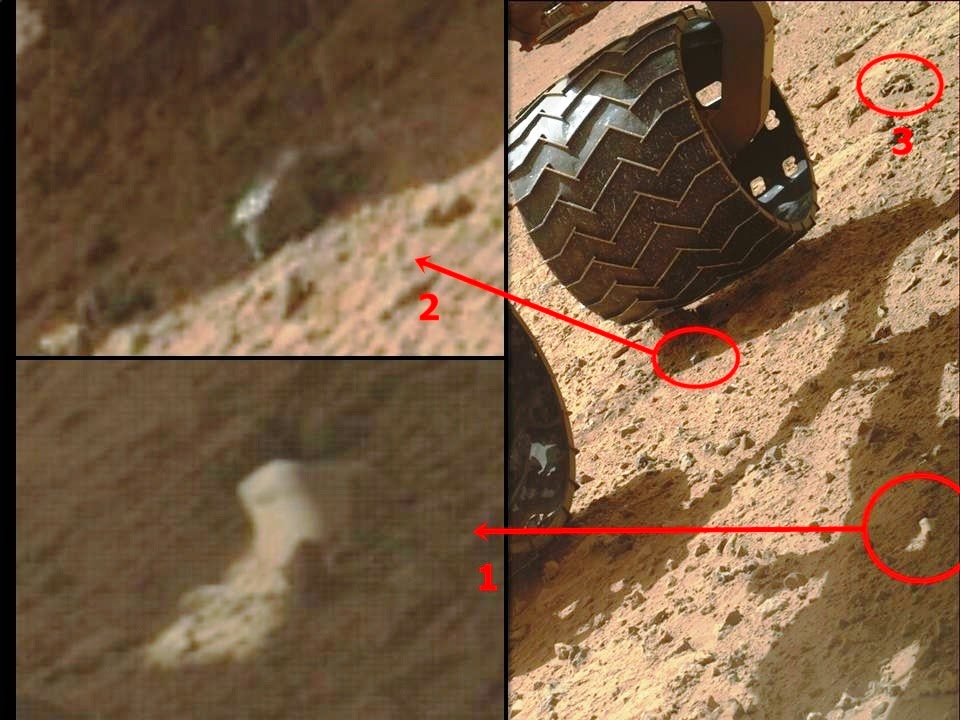 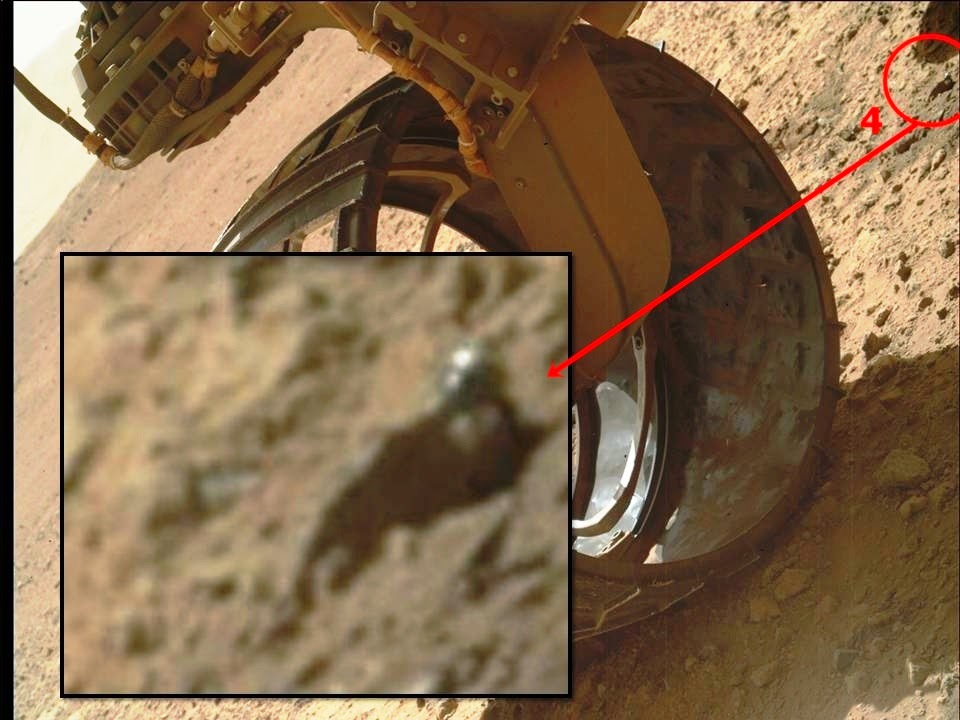 Keeping all the sophisticated instruments onboard safe while guiding the one-ton rover over rises and through sand dunes would be an unprecedented challenge. Though it was only a six-mile road trip, team leaders predicted it might take as long as a year to finish. Mars, however, had other plans for the rover, and they weren’t cordial. The allotted year is almost over, and Curiosity is but halfway to Mount Sharp.

Mount Sharp is unlike anything extraterrestrial ever explored. The rocks and minerals there “will tell us so much about the geological history of the region, and maybe more of the globe,” says Curiosity geologist Ralph Milliken of Brown University. Given the scientific treasures known to be present, the base of Mount Sharp is often described by the Curiosity team as “the Promised Land.”

In one of the latest images taken on June 8, 2014, see 'Object Nr. 3' second image above, also an object what looks like a very small alien figure, but it is undoubtedly a rock or a 'sand structure', but I found it an interesting structure to show it to you. What you think? 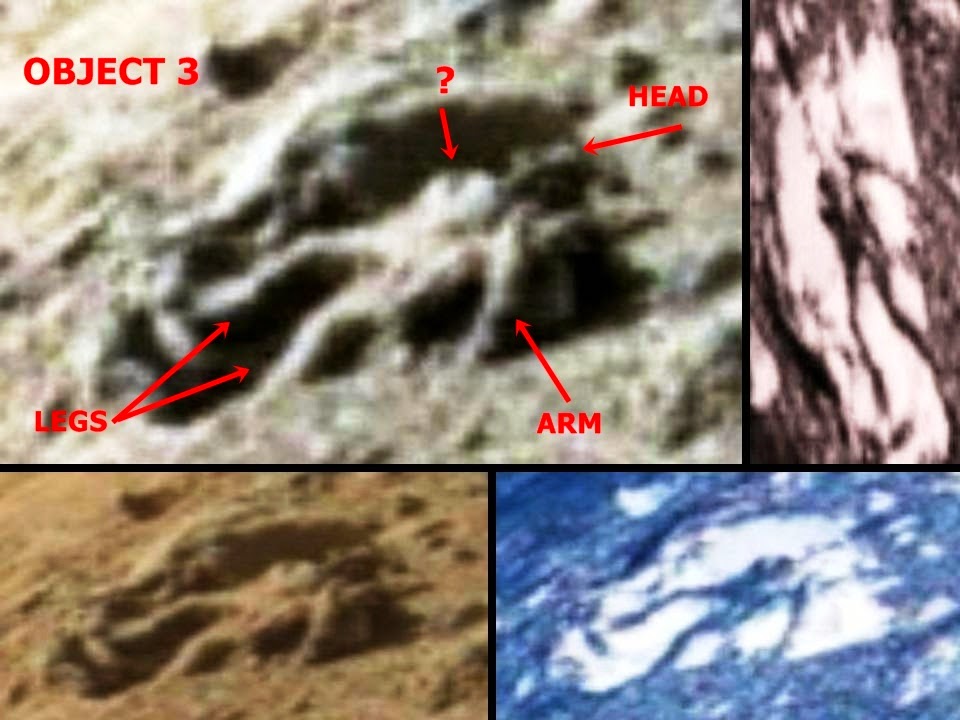 Finally, the question is whether the Rover can continue with his mission to "the Promised Land" or not. Read more here and here

What are these metallic looking objects captured by Perseverance Mars Rover

February 26, 2021
NASA's Perseverance Mars Rover captured on its third day on Mars strange rectangular bright shining metallic looking objects resting on top of an underlying metallic looking sheet.  It is suggested that it could be the Perseverance Heat Shield that helped protect NASA's Perseverance rover during its landing on the surface of Mars or other parts of the Mars 2020 mission landing system.  But an official map provided by NASA shows that the heat shield and other parts of the landing system are much further away then the metallic looking objects in front of the Perseverance camera.  Could it be something artificial, left behind by visitors from the past? Links:  https://photojournal.jpl.nasa.gov/figures/PIA24333_fig1.jpg  https://mars.nasa.gov/mars2020-raw-images/pub/ods/surface/sol/00003/ids/fdr/browse/zcam/ZLF_0003_0667217574_000FDR_N0010052AUT_04096_034085J01.png  https://www.nasa.gov/sites/default/files/thumbnails/image/pia24422-c1-3000.jpg?fbclid=IwAR26E1ln6dP7w-KXJN50xA1_yCh1h
Read more