An amazing phenomenon occurred in the sky over Huancavelica in Peru on January 10, 2015.

The footage shows a bright colorful object which energy flows in a spherical core in all directions. Two distinct rays are projected in opposite directions just as a neutron star or pulsar.

Is something burning up in the atmosphere are does this phenomenon suggest that it is a UFO in a high-energy state, or as UFOVNI suggest this UFO-like object became visible due to a “Pauli Effect”.

The Pauli effect is a term referring to the apparently mysterious, anecdotal failure of technical equipment.

It is a pyrotechnical object.

Pyrotechnics is the science of using materials capable of undergoing self-contained and self-sustained exothermic chemical reactions for the production of heat, light, gas, smoke and/or sound.

Pyrotechnics include not only the manufacture of fireworks and flares but items such as safety matches, oxygen candles, explosive bolts and fasteners.

It is a Plasmoid object. 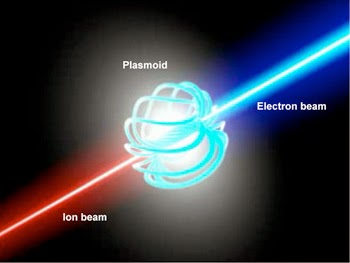 A plasmoid is a coherent structure of plasma and magnetic fields. Plasmoids have been proposed to explain natural phenomena such as ball lightning, magnetic bubbles in the magnetosphere and objects in cometary tails.

The energy jets from this object can be explained by the plasmoid phenomenon (plasma-magnetic entity). This phenomenon can fully explain the mechanisms that trigger and suppress jet formation. As a high-density energy storage phenomenon, the plasmoid would produce well-collimated jets after a time as determined by the process of particle collisions.

Below the interesting video of this strange and unexplained phenomenon.

Earth’s Strange Blobs Could be Huge Pieces of Alien Planet

April 18, 2021
Many scientists believe that the Moon formed when a Mars-sized planet, called Theia, struck Earth around 4.5 billion years ago.  Now, a team of scientists theorize that Theia’s remains are what formed two mysterious, continent-sized blobs of rock buried deep in Earth’s mantle.  For decades, seismologists have puzzled over these two blobs, which sit below West Africa and the Pacific Ocean, and straddle Earth’s core like a pair of headphones.  Up to 1000 kilometers tall and several times that wide, “they are the largest thing in Earth’s mantle,” says Qian Yuan, a Ph.D. student in geodynamics at Arizona State University.  Seismic waves from earthquakes abruptly slow down when they pass through the layers, which suggests they are denser and chemically different from the surrounding mantle rock.  These blobs might simply have crystallized out of the depths of Earth’s primordial magma ocean. But based on new isotopic evidence and modeling, Yuan believes the blobs are the guts of the theoreti
Read more

UFO like anomalies and rays of light crossing the Sun