October 11, 2015
A huge see-through, cloud-like round object was spotted in Manipur, India.

Some boys from a students’ hostel at Mantripukhri locality of Manipur’s capital city Imphal saw a strange transparent circular object hovering over the neighbourhood at around 1:30 pm on Wednesday 7, 2015 claimed Lincoln Liba. 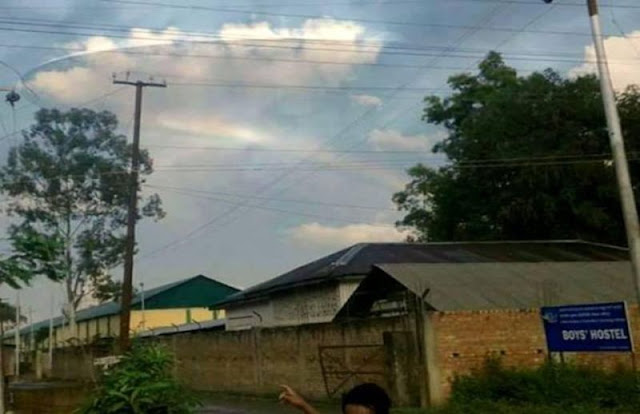 Interestingly, the round, see-through object is seen just above the residential buildings. One of the pictures even has a rainbow in the backdrop. It appears to be a genuine photo and not photoshopped as a person is seen pointing at the object in one of the pictures, reported Ibtimes.

Some people may take it as lenticular clouds but the possibility is less as it doesn’t look like lenticular clouds seen in the past. The object is also transparent with the clouds and rainbow clearly visible in the backdrop.

One day later on October 8, 2015 sky watchers witnessed mysterious objects which flew through the night sky over the Ganden Monastery in Lhasa, Tibet. It was also seen in the Xinjiang and Tianjin provinces of China.

According to satellite expert Ted Molczan, it was a rocket or a spy satellite and the wide nebulous streak is the plume from the fuel dump, which probably was completed a short time before the photo below was taken.

Both sightings occurred near Kongka La Pass, a low ridge pass in the Himalayas. It is in the disputed India-China border area in Ladakh. The Chinese held northeastern part is known as Aksai Chin and Indian South West is known as Ladakh. 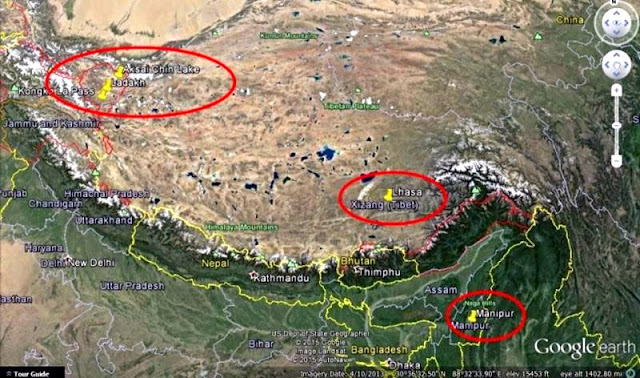 Over the years, this area is known for its many mysterious UFO sightings and suspicious objects coming out of the inaccessible huge mountains (Himalayas) and coming out of a lake named Aksayqin Hu.

According to many, there are UFO underground bases in this region. The UFO main base is in Soda Plain uses Aksai Chin's largest river Karakosh and lake Aksayqin Hu, 70 miles from Kongka La as underwater bases.

It’s interesting to know that only a few years ago, the Chinese discovered some Sanskrit documents in Lhasa, Tibet and sent them to the University of Chandrigarh to be translated.

Dr. Ruth Reyna of the University said that the documents contain directions for building interstellar spaceships! Their method of propulsion, she said, was "anti- gravitational" and was based upon a system analogous to that of "laghima," the unknown power of the ego existing in man's physiological makeup, "a centrifugal force strong enough to counteract all gravitational pull."

Dr. Reyna said that on board these machines, which were called "Astras" by the text, the ancient Indians could have sent a detachment of men onto any planet, according to the document, which is thought to be thousands of years old.

The manuscripts were also said to reveal the secret of "antima", "the cap of invisibility" and "garima", "how to become as heavy as a mountain of lead".

Naturally, Indian scientists did not take the texts very seriously, but then became more positive about the value of them when the Chinese announced that they were including certain parts of the data for study in their space program!.

This was one of the first instances of a government admitting to be researching anti-gravity.

It is possible that the sightings in Lhasa Tibet and Manipur in India have something to do with the UFO mystery in the Himalaya’s and the answer to this mystery can be found in the thousands of years old Sanskrit documents?

I think both the Indian and Chinese Government know this very well but both the Governments refuse to come out. Besides it's quite possible that the cloaked transparent UFO is man-made and the result of the data collected from the old Sanskrit documents.