February 20, 2016
In 1969, two months before Apollo 11's first manned landing on the moon, the crew of Apollo 10, Tom Stafford, Gene Cernan, and John Young become only the second crew in history to journey behind the far side of the Moon.

During this period of ‘LOS’ (Loss Of Signal), the astronauts encounter something truly incredible as they heard mysterious music-like radio transmissions. 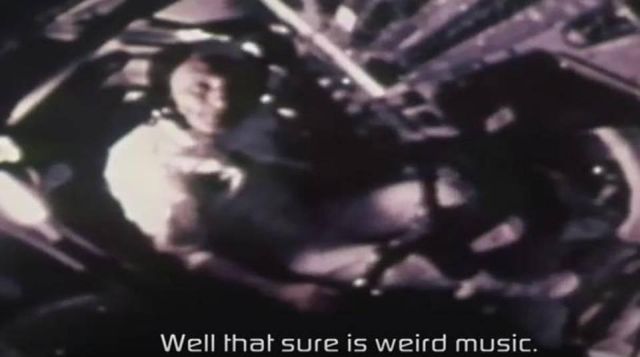 Almost 40 years went by before lost recordings emerged and remarkable these tapes recordings contained besides the conversation between the astronauts also the mysterious ‘outer space’ music’ coming through the Apollo module's radio.

Throughout the Apollo program, the CSM and LM spacecraft carried what were known as DSE and DSEA ‘black box’ flight data recorders. These instruments recorded the internal LM and CSM crew conversations while the astronauts were around the lunar far side and out of radio contact with Earth.

Here is an excerpt from the Apollo 10 DSEA audio transcript.

LMP You hear that? That whistling sound? That music even sounds outer-spaeey, doesn't it?
CDR Yes.
LMP Whooooooo. Say your..
CMP Did you hear that whistling sound, too?
LMP Yes. Sounds like - you know, outer-space-type music.
CMP I wonder what it is.
LMP isn't that weird - eerie, John?
CMP Yes, I got it, too .... and see who was outside.
LMP Boy, that sure is weird music.
CMP We're going to have to find out about that. Nobody will believe us.
LMP Yes. It's a whistling, you know, like an outerspace-type thing.
CMP Yes .... VHF-A ...
LMP Houston, we've got you on OMNI's. You hear music, Tom? That crazy whistling?
CDR I can hear it.
LMP That's really weird.
CDR It is.
LMP We had to have someone on our side that time.
CDR Yes.
LMP Listen to eerie music'
LMP Boy, it got quiet.
CDR Huh?
IMP Man, I tell you, it Just got quiet.
CDR ... to the walls - you can see the freaking walls.
CMP I never would have taken my helmet off in that thing.
CDR I mean you ... What the hell was that gurgling noise?
LMP I don't know. But I'll tell you, that eerie music is what's bothering me. You know that -
CMP God damn, I heard it, too.
LMP You know that was funny. That's Just like something from outer space, really. Who's going to believe it?
CMP Nobody. Shall we tell them about it?
LMP I don't know. We ought to think about it some.
CMP Did you hear it, Tom?
LMP Yes, he heard it.
CDR Yes.
LMP Hell, I just want to get out of this suit.