Torah Codes pointing to Messiah and Nibiru next week?

March 18, 2016
Richard Shaw, producer/director of the film 'Torah Codes: End to Darkness', and Rabbi Matityahu Glazerson, one of the world's leading researchers into Torah codes, share new findings pointing to Messiah and Nibiru.

Something significant happening at Purim - which may refer to next Wednesday evening, the 23rd, or to Shushan Purim, which is celebrated in Jerusalem beginning next Friday, the 25th. 2016.

Prior to an event, we know there are also signs from Heaven to be on the lookout for. Today, in our previous article Sunset angels wings in the sky over Cornwall, UK we reported a strange phenomenon in the sky during sunset in Cornwall, UK. A photographer captured a sun with two wings.

Chloe Moore, from the Royal Meteorological Society said: “A sun with wings is very rare and as far as I am aware, there is no official name for this phenomenon.”

Okay, it can happen, a sun with wings and it could be just a rare sky phenomenon but what if it happened twice within a short time period!

On January 13, 2016 another photographer, from the town of Koloa on the island of Kauai, Hawaii took a photo of the sunset. But instead of a beautiful sunrise she took a strange apparition in the sky what looks like a sun with wings. See our article Guardian angel in the sky above Hawaii.


Compare the two suns with wings - They are the same! That can't be a coincidence. 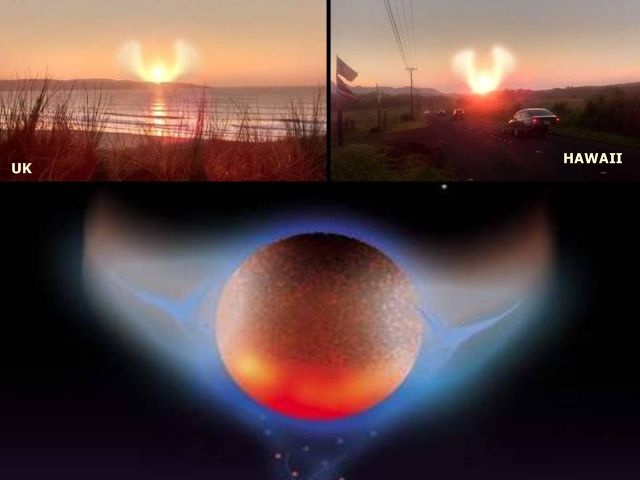 Given the fact that Rabbi Matityahu Glazerson refers to Nibiru aka the winged planet, I wonder whether these ‘winged suns’ or ‘guardian angels’ in the sky are signs from Heaven?

Anyhow we will see if Rabbi Matityahu Glazerson’s new findings indeed refer to an upcoming celestial event next week.