April 19, 2016
According to witness Shawn from Yellowstone, he saw a huge unidentified crashing object early this morning, April 18, 2016, not too far from the Super Volcano.

Although there is no additional information about this event, it sparked rumors on social media that it was a UFO that fell from the sky and crashed in Yellowstone National Park. 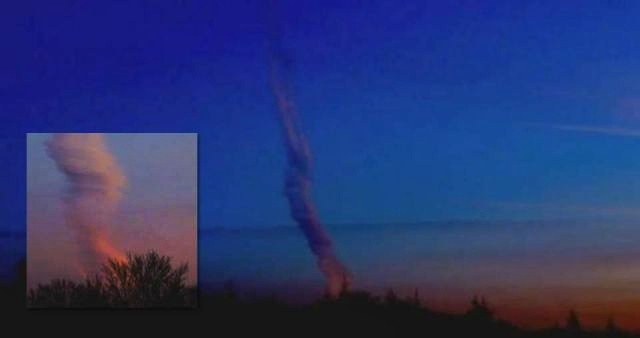 Since the video published on YouTube about the alleged UFO crash shows only a plume of smoke, we may wonder whether it is just a contrail from a plane flying towards the camera or indeed something entered the atmosphere and exploded above Yellowstone.

Personally I feel it was not a UFO but there is no doubt something weird is going on at Yellowstone and it goes like this:

Yellowstone is one of the most monitored and seismically watched areas on the planet and someone want to use its energy for destruction of the Yellowstone Super Volcano. Are they planning a Yellowstone false flag event which could lead to an extinction level event?

Several days ago thecommonsenseshow received two alarming letters from a geologist and geophysicist who is investigating increasing quake activity in the Yellowstone area, since 2011.

The context of these letters supports the idea of a potential false flag event.

Below some statements from the geologist who has signed a national security agreement which carries with it automatic prison time with no due process:

It looks like the “frackers” were experimenting, in other words, somebody was trying to assess if they could cause a series of eruptions at Yellowstone.

A former colleague who was investigating the same region said they detected electromagnetic interference. It was his feeling that a major eruption and quake could be triggered through a change in directed electronic frequencies.

The quakes in Ecuador are not natural and do not follow expected patterns. The geologist and his colleague believe they are artificially created and could be a test for what is coming to Yellowstone.

Note: The geologist’s statement the earthquake in Ecuador is artificially created reflects our view published in our article: Violent Shaking Along The ring Of Fire, The Pacific Is Moving.

I recommend to read the whole article regarding to these two letters at: thecommonsenseshow.

Coming back to the alleged UFO crash, as I said, I don’t think it was a UFO, but I do not rule out that it has something to do with the strange activities in Yellowstone.

Below video of the alleged UFO crash in Yellowstone.