October 04, 2016
Hurricane Matthew destroyed Haiti’s southwestern coast Tuesday killing at least nine people over the past few days. Florida declared a state of emergency, South Carolina began massive preparations to evacuate almost a quarter of its people (1 million plus) Tuesday as Hurricane Matthew crawled toward a weekend rendezvous with the state's Atlantic coast. 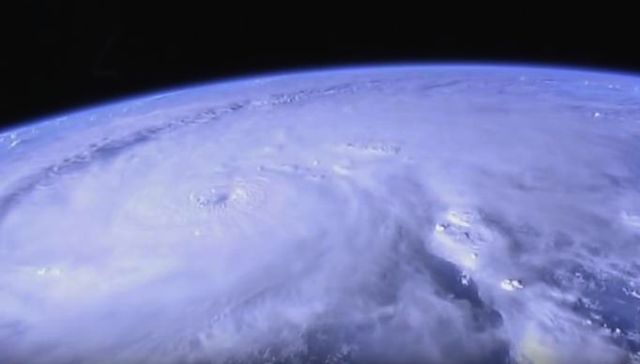 Hurricane Matthew is about to decimate specific populations that are already struggling to survive. Is this storm being manipulated by the weather/climate modification programs?

What agendas might the power structure be carrying out by manipulating and/or exacerbating climate chaos over specific regions and during critical windows of time?

Why has "Matthew" been at minimum allowed to strengthen? Was the unexpected 90 degree northward turn of this storm a natural occurrence? Or was this course alteration the result of geoengineering, ionosphere heaters, and atmospheric aerosol spraying?

Coincidence or Not, on October 1, 2016 an incredible sight of lightning high in the atmosphere above Hurricane Matthew was captured on camera by the crew of the ISS while orbiting above the Hurricane showing a fleeting electrical burst called a red sprite.

The mysterious red sprite also was photographed by an observer about 400 miles southwest of Puerto Rico. A red sprite is an extremely rare phenomenon and you may wonder whether the red sprite above the Hurricane Matthew is the result of the weather modification program or not.

The planet's climate system is aggressively being used as a weapon of war, conquest, and control.

Read more about the global geoengineering/weather warfare which is the greatest and most immediate threat to life on Earth short of nuclear cataclysm at geoengineeringwatch.org.