January 19, 2017
At this moment there are 23 volcanoes erupting around the world and there is one super volcano on the brink of eruption.

Scientists warn that the deadly North Korean 9,000 feet super volcano, Mount Paektu, located on the border between North Korea and China is set to erupt and cause a global catastrophe, the likes of which would not have been seen for a thousand years. 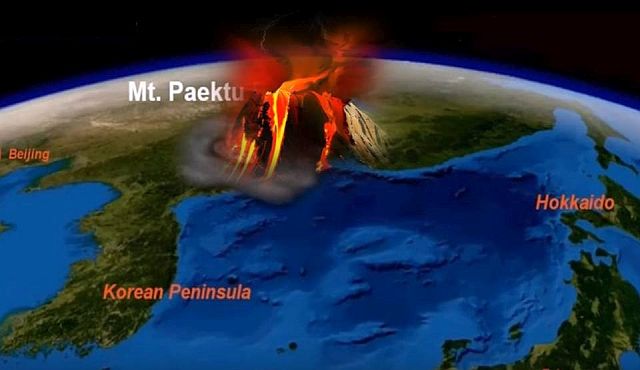 Another reason for concern, the super volcano is not far from a North Korean nuclear test facility where the government is conducting nuclear bomb tests.

Mount Paektu is responsible for one of the most violent eruptions in human history (alongside the Hatepe eruption of Lake Taupo at around 180 AD and the 1815 eruption of Tambora).

In the year of A.D. 946, "thunders from the heaven drum" (likely the explosions from the Mount Paektu eruption) were heard in the City of Kaesong, then the capital of ancient Korea about 450 km south of the Paektusan volcano, which terrified the emperor so much that the convicts were pardoned and set free.

Volcanic ash from this eruption has been found as far away as the southern part of Hokkaidō, the northern island of Japan and even in the City of Nara (Japan), about 1100 km southeast from the Paektusan volcano, an event of "white ash rain" was recorded.

Now, based on new studies which show that the eruption could eject far more sulphur into the atmosphere than previously thought, experts believe history is about to repeat itself.