Giant Hand of an Unknown Being found in Peru

January 03, 2017
When a local person and his friends were exploring the tunnels of the southern desert near their home they found a bizarre “Alien” hand which has only three long and thin fingers along with a small mummified elongated humanoid skull. 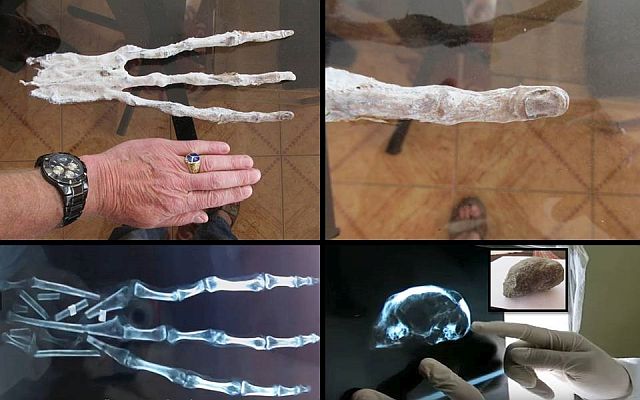 Although it is easy to call the “Alien” hand as a hoax, the artifact was seen by researcher Brian Foerster – HiddenIncatours - in person recently in Cusco Peru.

It was presented to Mr. Foerster and his team, by the local person living in Cusco, a region of Peru who does not want to sell the artifact as he simply wants to know what it is.

X rays of the “hand” show that each of the 3 fingers has 6 bones, while a human hand has 3. Once again, as with the skull, physicians in Cusco determined that clearly this is not the hand of a human, but is made up of bone and skin. They were unable to determine what kind of life form it is, or was.

The skull was x-rayed and examined by physicians here in Cusco who stated that it clearly was not a human, but was a life form of some kind. The skull is composed of bone and skin of some sort. Plans are in the works for radiocarbon and DNA testing early in 2017 in the US.