The Rock we all live on called Earth is Cracking Up!

January 30, 2017
We are talking about the rock we all live on called Earth and it seems to be well cracking up in more ways than one also seems what is up with the Sinkholes? 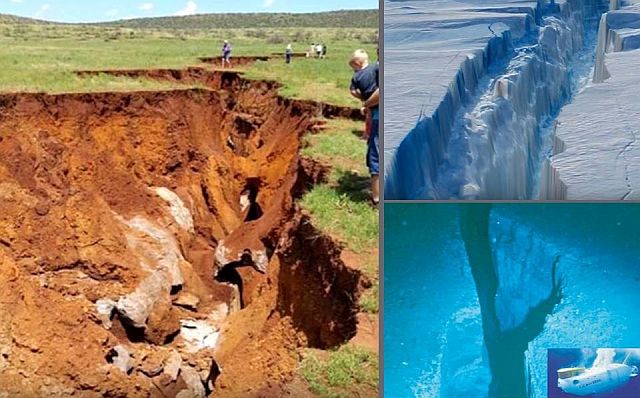 Almost like something or someone been doing a little underground digging, what was that story about a race of beings who inhibit under the Earth, maybe they are expecting something.

But serious, cracks as big as states showing up all over the world, which proves that the tectonic plates are shifting and they are moving faster now than at any point in the last 2 billion years, according to the latest study of plate movements.

Something is tugging on our planet and we are seeing the effect like the last reported huge crack which appeared between Kuruman and Danielskuil in South Africa on January 12, 2017. No matter what something is going on!

Something is observing the Ingenuity Mars helicopter

April 05, 2021
The Ingenuity Mars helicopter, which arrived with the Perseverance rover, will be the first-ever powered, controlled flight on another world.  During the deployment process of the helicopter, an unknown anomaly can be seen sitting or standing on the edge of a mountain.  Dust speck on the camera lens? Or could it be that something is observing the deployment process of the helicopter?
Read more

Massive spacecraft caught by two NASA satellites near the sun

April 07, 2021
On April 2, 2021 NASA's satellite EUVI-A 304 captured a massive UFO. One day later, on April 3, 2021 another NASA satellite EUVI-A 284 captured the same UFO at the same location near the sun.  Seen from different angles as captured by the two satellites there is No doubt that it is the same spacecraft.
Read more

April 06, 2021
Weird UFO caught by motion detection on ptz camera mounted on top of structure out at remote unoccupied farmstead in Williston, North Dakota on April 5, 2021.  UFO moved from north to south - unclear how far away - next motion event was daylight, you can see the grain bins in back ground. There were 2 dead cows found in tree row less than a mile away - no obvious cause of death, covered in mud. No farms with cows around for 10 miles, no reported missing cows from nearby farms.  Never seen anything like this out there on the cameras. Mufon case 114593.
Read more