Alien Mining Machinery discovered on the Far Side of the Moon

on April 25, 2017
We present an analysis of Apollo 15 and Lunar Reconnaissance Orbiter images of two unusual features in the crater Paracelsus C on the far side of the moon. 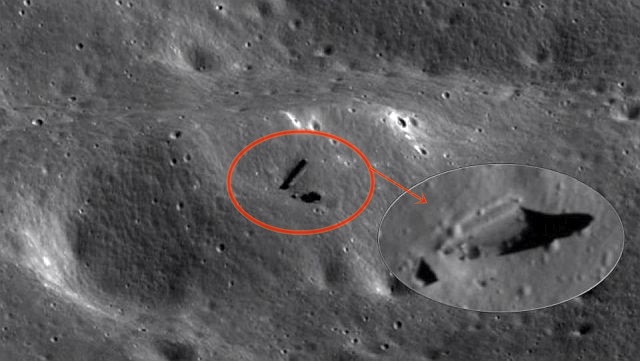 At first glance these structures appear to be walls or towers on the lunar surface. By combining multiple images we show the larger feature, oriented in a northeast/southwest direction, is not simply a wall but two walls on either side of a narrow valley or “passageway”.

Using single image shape from shading and 3D terrain visualization we show in a computer generated perspective view looking northeast that the southwest end appears to be the entrance to the passageway.

A reverse angle view looking southwest shows the passageway ending at a rise of terrain at the other end, possibly leading underground.

The terrain surrounding the two structures is not flat but appears “excavated” by some unknown artificial mechanism.

As these objects are visually different from the lunar background because their underlying structure is different, we assume that the two objects are in fact mining machines/crawlers used for mining operations, conducted by extraterrestrials.