on April 23, 2017
Images just released from the Mars Curiosity Rover, recorded on April 23, 2017 by the Right Navigation Camera reveals an orb and a strange beam of light above the surface of Mars that appears artificial. 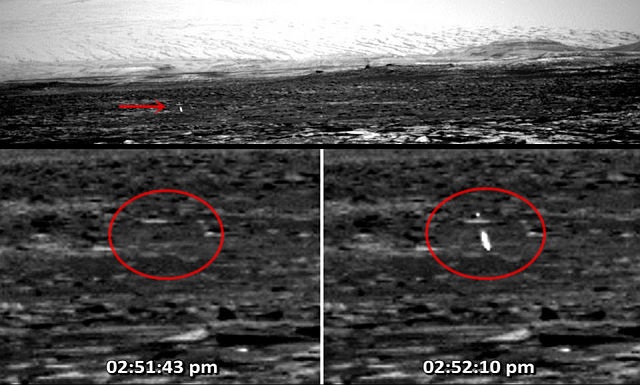 The first image captured on 02.51.43 PM shows a specific spot on the surface without any sign of something artificial but a second image showing the same spot, captured on 02.52.10 PM, shows an unexplained white orb which seems to release a white beam of light towards the Rover.

Is it possible that a high-energy particle like a cosmic ray has hit the camera’s CCD (the array that converts optical light into an electrical signal) causing a temporary overload of charge, leaving a dot or a trail or the beam of light is produced by an intelligent device or being on Mars?