Weird Manta-Ray-shaped appearance spotted in the clouds over Cheswick, Pennsylvania

Monday, July 31, 2017
While taken photos from sun/clouds a photographer in Cheswick, PA observed a “Manta-Ray”-shaped object in the sky on July 30, 2017 and from his location with the camera pointed towards s/w sky he managed to take a photo of the strange appearance. 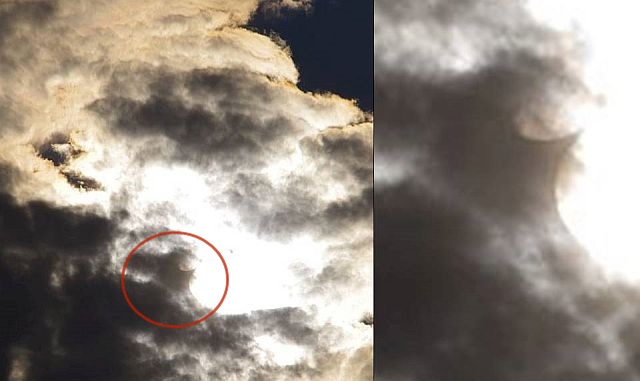 According to the photographer, the object, which had no visible means of propulsion or flapping wings, moved from right to left. Mufon case 85521.

So, the strange appearance is an unknown creature that takes on the form of manta ray or could it be a giant oceanic flying manta ray?

Though, given the location which is far from the ocean it seems unlikely that it is an oceanic flying manta ray, yet the question whether it can fly so high between the clouds and stay out of the ocean for a long time without taking oxygen.

A similar flying manta ray shape has been filmed at 20,000 ft. from a French government airplane window.

The old footage below is from the French government circa 1948 and shows around the 0.15 mark a “manta-ray”-shaped object flying above the clouds, then it drops a few hundred feet below in about 1 second. The original frames were motion tracked and stabilized.

There is something strange about this kind of manta ray shapes that cannot be explained, whether it is an oceanic flying manta ray or something from other worlds.