Monday, September 25, 2017
Within two days, two UFOs have been photographed over Brazil and St Lucia that looks very similar.

Is it just a coincidence or is it possible that both objects, alien or man-made, are part of an unknown military project, given that in case of the St Lucia UFO about 20-30 minutes after the sighting an army helicopter appeared and flew over the same area. 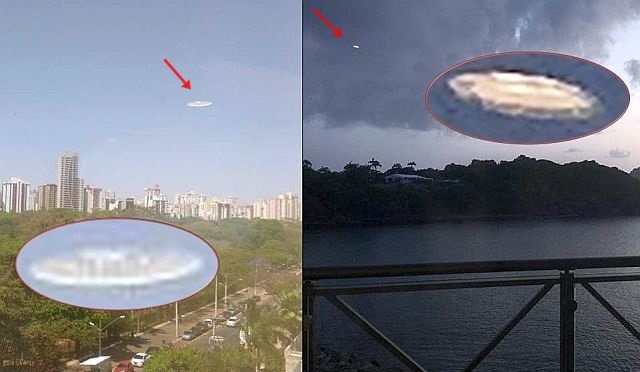 The first UFO has been captured in Goiânia, Brazil on September 23, 2017.

The photographer who was inside a tall building took the photo with his Moto G3 cell phone and said that the sky was clear with some chemtrails. He did not see the UFO which was oval shaped with a dome until he discovered the object in the photo. Mufon case file.

The second UFO has been captured in Smugglers Cove, St Lucia on September 24, 2017.

The photographer was on vacation in St Lucia when she decided to head outside onto the balcony to capture photos of the sunset. She also didn’t know that she has captured a UFO until she was showing the photos to her husband and noticed the object in one of the images.

She stated: “Immediately I zoomed in to a strange glowing light that stood out on top / in front of huge cloud cover. The photo I took was a live photo and the object just seems to hover. When I zoom in, the oval like shape is almost too perfect. About 20-30 minutes after the sighting (when the photo was taken) what appeared to be an army helicopter (camo) flew over the resort! Mufon case file.
2017 aliens extraterrestrials mufon south america UFO ufo videos 2017