on October 27, 2017
Volcano Popocatépetl, located in the states of Puebla, Mexico, and Morelos, in Central Mexico is well known for the many Unidentified Flying Objects which appear near and over the volcano. 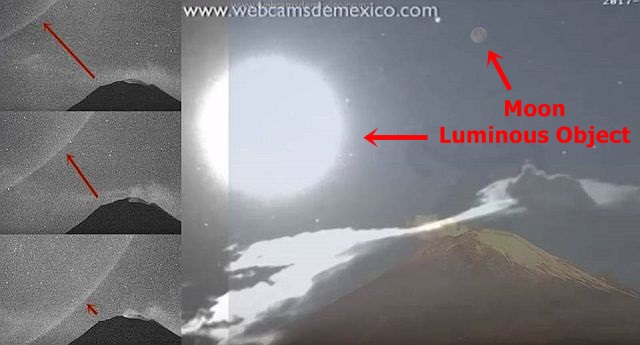 On the evening of October 23, 2017 another strange activity happened above the volcano.

A webcam trained on the volcano recorded a mysterious luminous spherical object that suddenly appears, streaking across the sky before it disappears.

At first glance the object seems to be the Moon but after analyzing the event, see the anomaly/volcano in the second video, it turns out that the anomaly is not moon.

Like many sightings before this sighting over the Volcano also remains a mystery, though a commenter on YouTube expressed his idea that this anomaly could be a being that operates in a frequency that is different from ours. However it can enter into a frequency that is compatible to ours and that’s when we see the entity.