December 05, 2017
Do you remember the mysterious cylindrical shaped object from interstellar space named Oumuamua that came within our solar system last month? 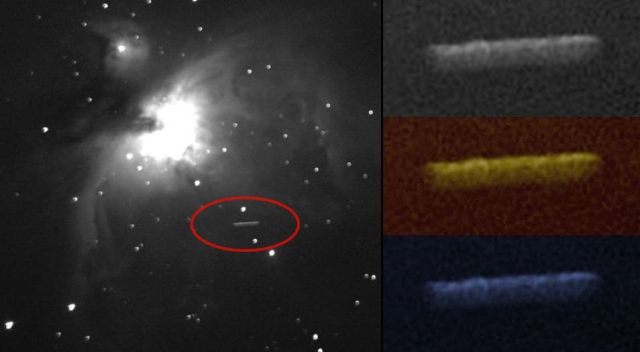 Now, on November 29, 2017 a sky-watcher from North Carolina was out collecting data on M42 Orion Nebula.

As he still was fine focusing his 8 in astrograph / Newtonian Telescope a giant cylinder shaped UFO appeared on his laptop screen which he captured in a single 30.2 second frame. 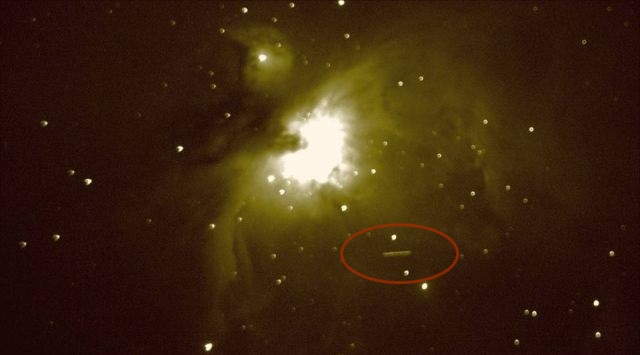 GIF image: See the movement of the objects at the bottom of the frames.

The sky-watcher who has submitted the revealing space images to Mufon - case 88566, says: “It's not the first and surely not the last as I search the night sky for galaxies, nebula and the truth that's out there.”

June 24, 2021
A secret base built in a crater on the planet Mars? Google Mars shows a 4km width crater on Mars in which a large closed building structure seems to have been built. Visible are two large rectangular black areas, separated by a rectangular pillar and in front of the structure on the left, another building.  But before we assume it is a secret base, there is also the possibility that the structure is nothing more than a compression artifact caused by digital compression software, giving it a pixelated look.  Though, surrounding craters do not show similar structures which makes it possible that the huge structure in this crater is not a compression artifact but a hangar with two (black) entrances to hold spacecraft. Coordinates Google Mars: 10°47'20.46"N 130° 0'41.91"E
Read more