November 13, 2018
It seems as November is the month to spot interstellar alien craft near the Orion Nebula M42.

The Orion Nebula (also known as Messier 42, M42, or NGC 1976) is a diffuse nebula situated in the Milky Way, being south of Orion's Belt in the constellation of Orion.

M42 is located at a distance of 1,344 ± 20 light years and is the closest region of massive star formation to Earth.

On November 7, 2018 Moonshot23 spotted a huge cigar-shaped UFO near the Orion Nebula M42 coming across his CMP screen as he was stacking images in his nebulosity program. “The three second between shots does stretch the object, I tested it out”, he said.

Last year on November 29, 2017 a sky-watcher from North Carolina was out collecting data on M42 Orion Nebula.

As he still was fine focusing his 8 in astrograph / Newtonian Telescope a giant cigar-shaped UFO appeared on his laptop screen which he captured in a single 30.2 second frame. 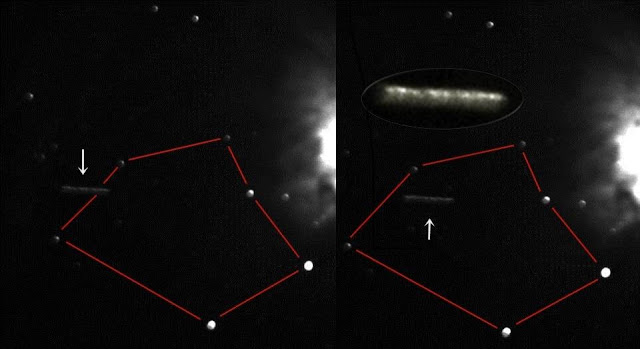 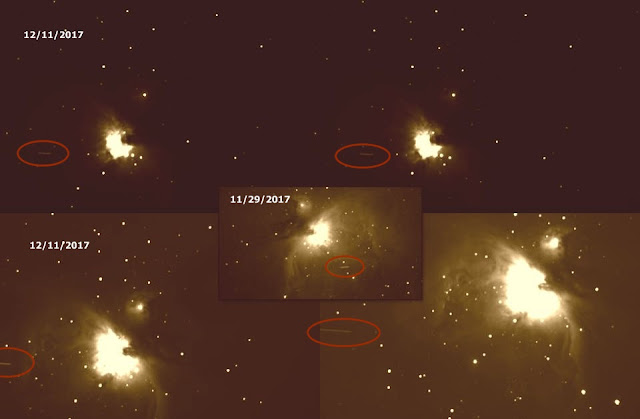 Below the footage of the huge cigar-shaped UFO captured on November 7, 2018.