UFOs shooting up into the sky and leaving huge holes in the clouds over Mt. Vernon, Washington

on February 03, 2019
On January 28, 2019 something strange happened over Washington and Mt. Vernon. Many people witnessed what they call "fallstreak holes" in the sky. 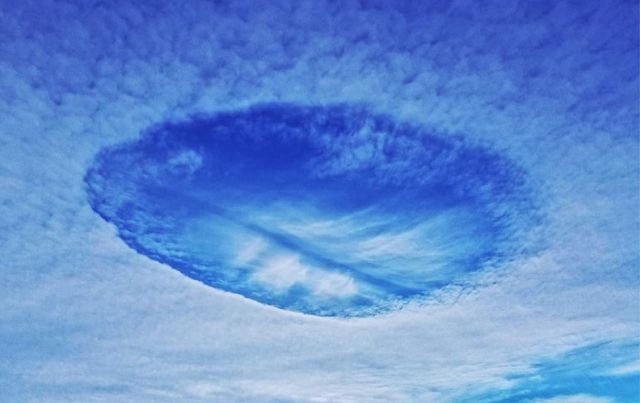 Now it is said that a "fallstreak hole" form in high altitude clouds when the temperature drops below 00 C but the water droplets in the cloud do not freeze, they remain in a super cooled liquid state. When suddenly a disturbance occurs, per perhaps a plane flies by, the sub-zero water droplets begin to crystallize in a wave expanding outwards from the point of the disturbance with as a result the ice crystals billow from the resulting "hole."

So far a reasonable explanation for the strange "holes' in the clouds. But what if such a "hole" in the clouds has been caused by something else.

On the same day, a person has not only photographed two enormous "holes' in the sky over Mt. Vernon WA but he saw two large objects moving approx. 150 mph; then turning sharply and ascended above the clouds and the clouds dispersed. 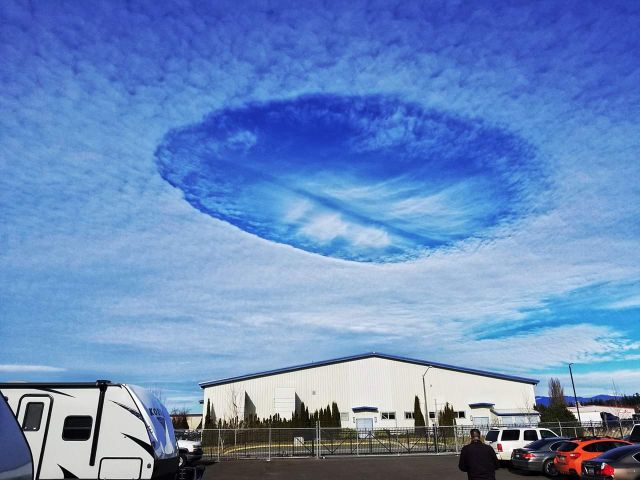 He made the following statement:

I was pulled over letting my dog run and I happened to notice something moving about 1000 ft up just above me. I immediately could tell it was something I had never seen before they were both cigar-shaped metallic and traveling approximately quarter mile apart but in the same exact direction.

They made a sharp kind of right and upward turn very quickly and headed straight up.

It's at that point when I started to grab my phone to take a picture. There seemed to be small puffs of smoke or vapor coming out from behind as they reached almost the cloud layer then disappeared above the clouds.

As I was setting my phone to camera after unlocking the phone and zooming out as far as it would zoom I looked up to aim and there were two huge holes if you will in the clouds. 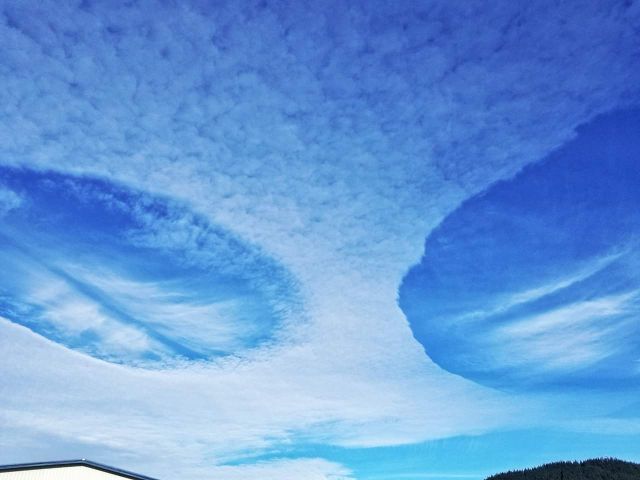 I snapped the photos, which I have submitted to Mufon for further investigation, and literally within 2 minutes the clouds were back to normal.

I heard nothing during this whole instance. I was very excited and absolutely could not believe what I had just saw right after that instant I heard too low booms kind of like a sonic boom and had to think it had something to do with the two craft I saw basically disappear in front of me. 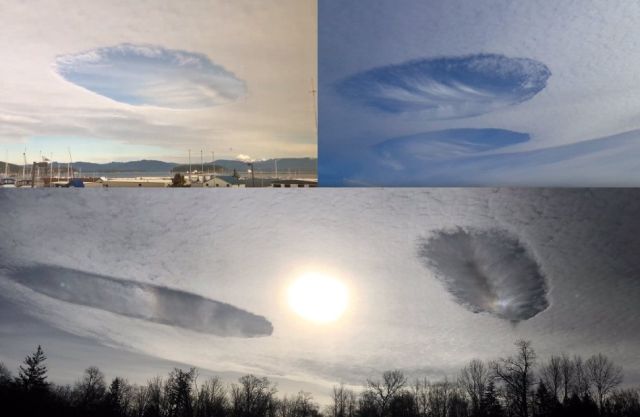 In summary: It appears that these "holes" are not only caused by a natural phenomenon but by cloaked or de-cloaked UFOs too. At the moment a UFO shoots up into the sky, going through the cloud layer before disappearing above the clouds, it leaves a huge hole and a boom can be heard.
2019 mufon sky phenomena strange clouds UFO ufo clouds