In this video we will show you the second UAP which we have named the Kaikoura Apple.

This field scatters light coming from the craft and it makes everything inside look distorted and hazy. We pulled the original image through two proprietary techniques capable of analyzing- and visualizing gravitational effects (not gravity itself) and we did not see one controller inside the UAP but we saw left and right, of the controller in the center, multiple copies of the same controller. We strongly believe that this is caused by gravitational lensing.

We have created hundreds of images and only those of the highest quality were stacked and used for further analysis and post-processing.

We were always careful during processing but could not prevent loss in detail. Due to the nature of the algorithms it was impossible to maintain the very fine structure of the original image and simultaneously retrieve full color.

The processed image therefore may give the viewer the impression of a less natural appearance. Perhaps that one day we shall find a better or different way to penetrate this layer but for the moment and in view of currently available technology this was the best if not the only solution.

After three years of testing we finally succeeded in fully revealing the alien controller and what we all witnessed knocked our socks off.

The first part of this video "briefly" describes the major technological challenges we faced trying to enhance this UAP.

The second part contains the first enhancements revealing the controller and the last part shows the final result.

We must warn you! We strongly advise viewer discretion! 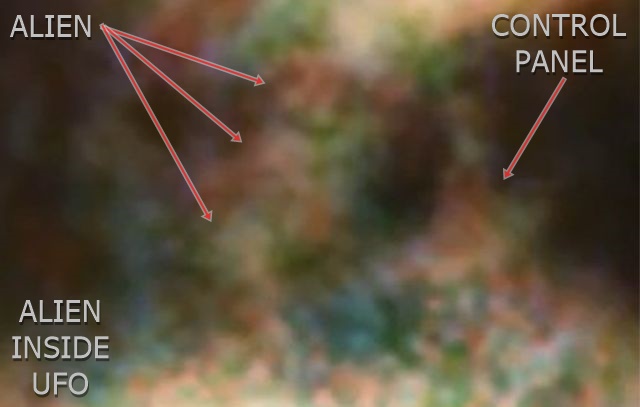 The ALIEN is "clearly visible "but for some of you it may take some time to recognize it. This creature is something you have never seen before and your brain therefore will not immediately be able to identify the shape.

1. When you watch the images try not to think of an alien as you may have seen it in the movies.
2. Take at least 100 cm distance from the monitor as putting your nose against the screen will have a negative effect because of the noise.
3. By stepping back from the monitor your brain will filter the noise in the image and the entire picture will become clearer and also gamut, borders between colors will be more distinct.
4. Look at the colors, follow contours and see where they connect.
5. Try to find any shapes which may look familiar.