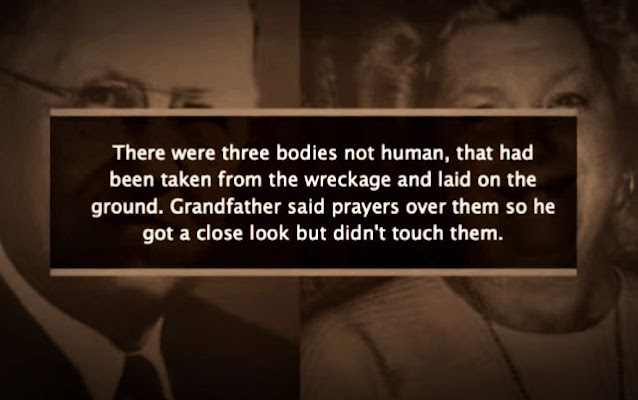 The event was unknown until the 1990's, when one highly credible witness, Charlotte Mann, came forward with the story of her grandfather, Reverend William Huffman.
It wasn't an airplane or like any craft he'd ever seen. It was broken and scattered all around, but one large piece was still together and it appeared to have a rounded shape with no edges or seems. It had a very shiny metallic finish.
You could see inside one section and see what look like a metal chair with a panel with many dials and gauges - none familiar looking to him.
There were three bodies not human, that had been taken from the wreckage and laid on the ground. Grandfather said prayers over them so he got a close look but didn't touch them.
He didn't know what had killed them because they didn't appear to have injuries and they weren't burnt. It was hard for him to tell if they had on suits or if it was their skin but they were covered head to foot in what looked like wrinkled aluminum foil.
There were several people with cameras taking pictures or everything. Two of the plainclothes men picked up one of the little men, held it under its arms and a picture was taken.
This is a truly fascinating story, and although corroboration has been limited to a few other individuals, many serious researchers think it really happened.