August 28, 2020
Something very mysterious has happened over the course of a week.
On August 11, 2020, the large Arecibo radio telescope in Puerto Rico sustained serious damage due to a snapped cable. The cable damaged the giant radio telescope's reflector dish forcing it to shut down temporarily.

The Arecibo Observatory is the sole facility of the National Astronomy and Ionosphere Center (NAIC) and the source of data for the SETI (Search for Extra-Terrestrial Intelligence).

But the cable failure is highly suspicious as they are always doing maintenance and especially focusing on the cables to make sure they are sturdy and secured. It is more likely that the Arecibo radio telescope has been damaged on purpose.
On August 16, 2020 asteroid ZTFODxQ aka 2020QG flew within 1,830 miles over the Southern Ocean near Antarctica which makes this asteroid the closest space rock ever.
Astronomers had no idea the asteroid existed until it passed by which is very unusual. Even the Palomar Observatory in California first detected the space rock about six hours after it flew by Earth.
Below an image of the so-called asteroid ZTFODxQ aka 2020QG. 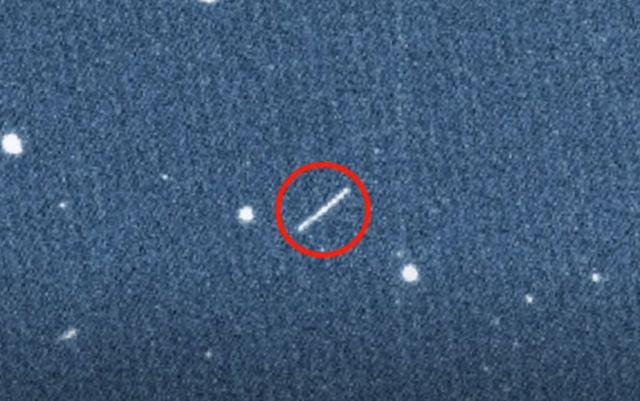 The Arecibo radio telescope was knocked out of commission just a few days before, lands the possibility that this was a coordinated effort, so they could not see that this asteroid coming in, or what it actually was, a cigar-shaped UFO.
Then we have the very unusual story of the Russian cosmonaut catching UFOs over Antarctica. UFO pictures were released on August 20, 2020 taken from the International Space Station by Russian cosmonaut, Ivan Vagner over Antarctica.

But it is not only about alien spacecraft, according to Dark Journalist, TTSA increasingly steering toward the "threat to national security" narrative which is nothing more then a set up of the CIA and TTSA to create a false flag UFO threat.
With the sabotage of the Arecibo radio telescope, the supposed asteroid which was a cigar-shaped UFO and the remarkable UFO images taken by cosmonaut Ivan Vagner, we can conclude that there is a lot more of activity going on in space then we know and it runs very very deep!
This and much more in the next video from Dark Journalist, Daniel Liszt.