August 05, 2020
Reviewing the massive explosion in Beirut in Libanon on August 4, 2020 which killed at least 135 people and as about 5.000 people are wounded, due to the unexplained explosion of 2,700 tonnes of ammonium nitrate.

Now, a retired physician who is interested in Physics and origin of humanity and the universe has sent an image to the Mutual UFO Network (MUFON) for further investigation showing a fighter jet and a mysterious spherical object just before the huge explosion.
The physician states: "This picture was forwarded to me from Lebanon, I did not take the picture. It was published on line by an amateur, and shows what appears to be a jet fighter flying over the site of the massive explosion that destroyed the Port of Beirut and portion of the city. Destruction was seen up tot 15 miles around the site.It was heard in Cyprus 150 miles away and several eye witness interviewed consistently said they heard a jet in the sky shortly before the explosion."
In the center of the picture below the jet appears a round dark spherical object with a halo just before the massive explosion in Beirut, Lebanon. 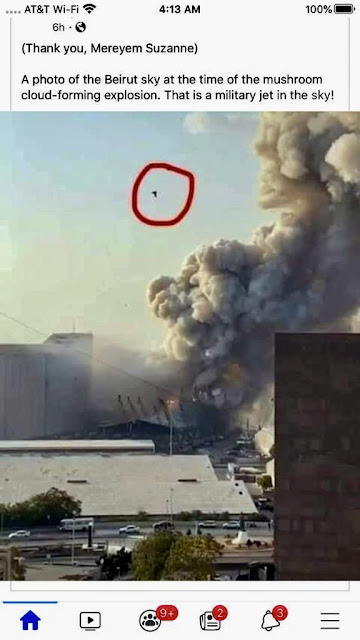 Original image provided by physician showing a fighter jet and dark spherical object.
Many questions remain, but maybe the image provided by the physician and the following video provide more clarity about the cause of the explosion of the 2,700 tonnes of ammonium nitrate.
Video: Watch for the small black object approaching the grain silos and then explode right after.