November 14, 2020
Under the floorboards of a house in Foyers, Scotland, they have found a mysterious box that once belonged to the occultist Aleister Crowley who previously lived there. 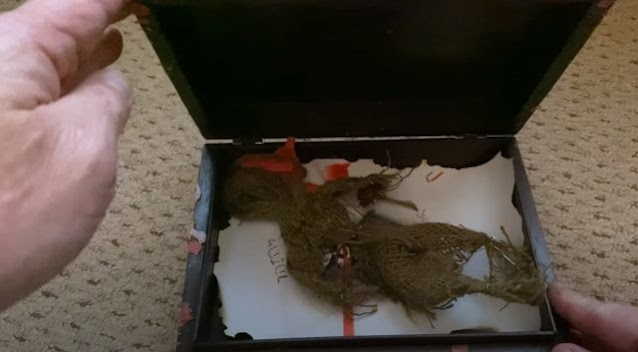 According to coasttocoast, in the video of The Tin Biscuit PodCast the 'dybbuk' box is opened to reveal a doll made with human hair, coins, a dried flower, and a creepy sketch, assuming that the bizarre contents were possibly used in a ritual to summon and bind a demon.

Image left: Aleister Crowley.
What many people don't know is that the occultist Aleister Crowley, who founded the religion of Thelema, identifying himself as the prophet entrusted with guiding humanity into the Æon of Horus in the early 20th century, and his friend Jack Parson who was an American engineer, chemist and also a thelemite occultist, were the founders of NASA's Jet Propulsion Laboratory (JPL) and the Aerojet Engineering Corporation.
Actually, JPL stands for “Jack Parson Laboratory” named after Jack Parson but since its inception in 1958 the truth of NASA’s occult origins has been discretely hidden from public awareness and they changed the name of JPL into Jet Propulsion Laboratory.
See also AEON of HORUS: The occult history of NASA