November 25, 2020
A photographer who went outside at 6.40 am to film the sunrise standing on a small rural road in a small town in Quebec, Canada on November 15, 2020 when he heard several strange booms, almost a metallic sound, and right after he saw two long white/yellow lines, like beams of light, flying horizontally in front of him. 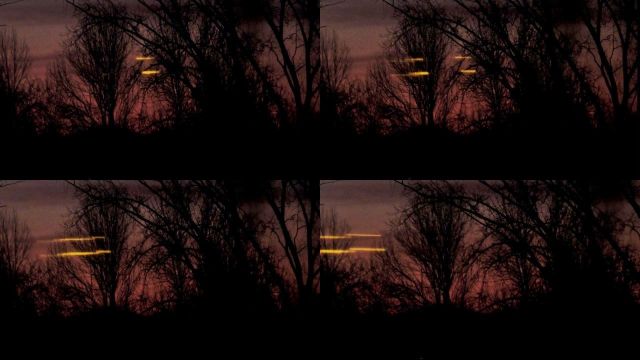 The distance between the lights and the photographer was about 150 feet and they flew at about 12 to 15 feet from the ground.
Although he was surprised, he continued to watch the sunrise. He even forgot about the incident until he downloaded the video from his camera to his computer. Since he is standing in the middle of the road, there is no mirror or glass in front of the photographer to cause a reflection, nothing.
Given the loud booms and the two fast moving beams it almost looks like the beams were fired by a helicopter or airplane but then again, who fires these kinds of (laser) beams or maybe flares, flying horizontally at about 12 to 15 feet from the ground with the risk of hitting someone or the photographer has captured something else, something that cannot be explained?
Source: MUFON