UFO moving across the Golden Gate Bridge at tremendous speeds

November 13, 2020
After reviewing some of his drone footage from a San Francisco trip this past September, the drone owner came across an entity moving across the Golden Gate Bridge at tremendous speeds. 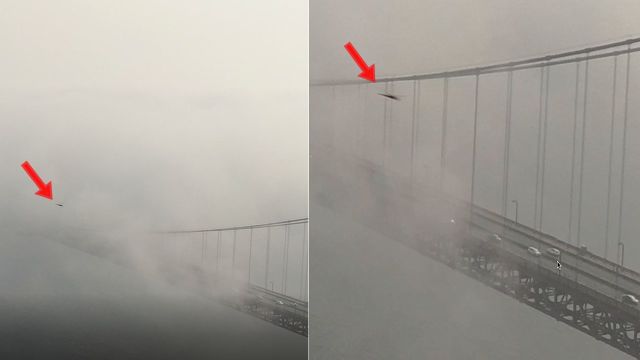 The object which has no visible source of propulsion, wings or tail moves in ways that is not physically normal.
Besides the possibility that it is a secret military craft equipped with advanced technology unknown to the public, it is also possible that the drone owner captured a so-called "fastwalker", which is a term used by NORAD and branches of armed forces to describe unidentified aerial phenomena moving and/or changing directions at high speed far beyond what current aerospace technology is capable of.
I hope that the cars on the bridge make it apparent just how fast this UFO is moving alongside.
MUFON Report: https://mufoncms.com/cgi-bin/report_handler.pl?req=view_long_desc&id=112239