Mystery as huge luminous object appears in the night sky over Patagonia, Argentina

December 12, 2020
Photographer Santiago Arévalo said he went down to the beach at midnight that night with four people. The goal was to make astrophotography of the Milky Way. 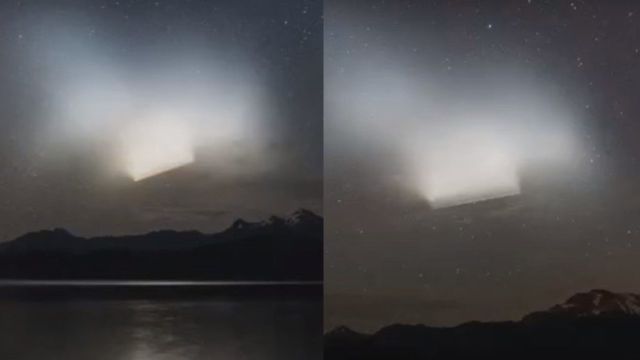 Santiago: We all sat on the sand looking at the stars and talking for a while, around 1.30 am we see that from behind the mountains, on the other side of the lake, a kind of white glow begins to appear on which he managed to capture the exact moment when a huge luminous object lit up in the night sky.
We all thought it was the moon coming out of that sector, which is very strange because the moon comes out from the totally opposite side.
I run to the tripod to turn the camera in that sector and let it take some pictures to see what I can get to save from what we have seen, which up until then was the moon.
After a few seconds we see that it was not the moon, that it was a point, something a little bigger than a star, but it was accompanied by a kind of halo in the shape of a triangle.
At that moment we were all thinking what it was, if it was a plane, but it didn't have the red and green lights on the sides. It was super weird and the light was very white. After a few minutes it vanished into the sky and the cloud-white glow remained for a few more seconds.
I was able to record this and you can see the trace that light made over the time the camera closed, that's why you can see a line and not a point. The next day we talked to other acquaintances who were in the same campsite and they told us that they were also watching it from another section of the beach.
What did NASA say about it?
NASA explained that this huge light object correspondents with the passage of a rocket that belonged to a failed lunar mission in 1966, which was propelled by a centaur from the 1960s. 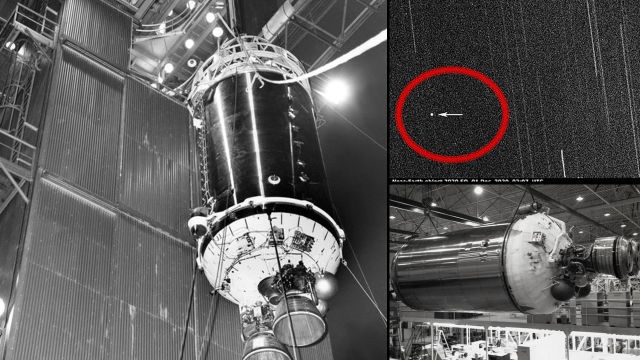 Centaur rocket 1966 - White dot in upper right image is the Centaur rocket in orbit.
The NEO (near-earth object) - (Centaur rocket) was discovered in September by astronomers looking for nearby asteroids and was seen last Sunday around 1:30 am across the Patagonian area.
But I not buy NASA's explanation given that an object of enormous proportions, larger than the Moon, cannot be attributed to the presence of an old Centaur rocket that is adrift in space.