What are these metallic looking objects captured by Perseverance Mars Rover 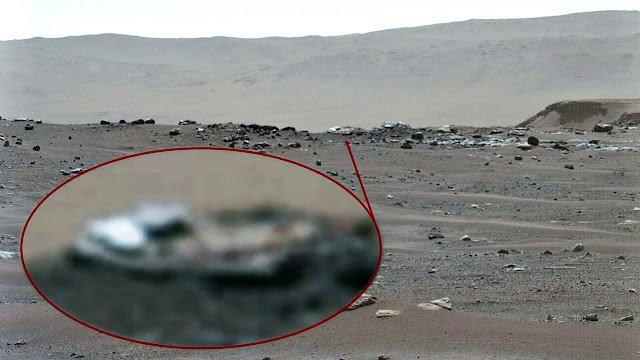 It is suggested that it could be the Perseverance Heat Shield that helped protect NASA's Perseverance rover during its landing on the surface of Mars or other parts of the Mars 2020 mission landing system.
But an official map provided by NASA shows that the heat shield and other parts of the landing system are much further away then the metallic looking objects in front of the Perseverance camera.
Could it be something artificial, left behind by visitors from the past?
Links:
https://photojournal.jpl.nasa.gov/figures/PIA24333_fig1.jpg
https://mars.nasa.gov/mars2020-raw-images/pub/ods/surface/sol/00003/ids/fdr/browse/zcam/ZLF_0003_0667217574_000FDR_N0010052AUT_04096_034085J01.png
https://www.nasa.gov/sites/default/files/thumbnails/image/pia24422-c1-3000.jpg?fbclid=IwAR26E1ln6dP7w-KXJN50xA1_yCh1huiEUv_12dSWRxct-BnDrnXIrXti5zM