on July 13, 2021
This footage was leaked via a Department of Homeland Security agent. What you are looking at is a legitimate leak of a genuine UFO buzzing and then following an A10 Warthog from the nearby, Davis Monthan AFB. 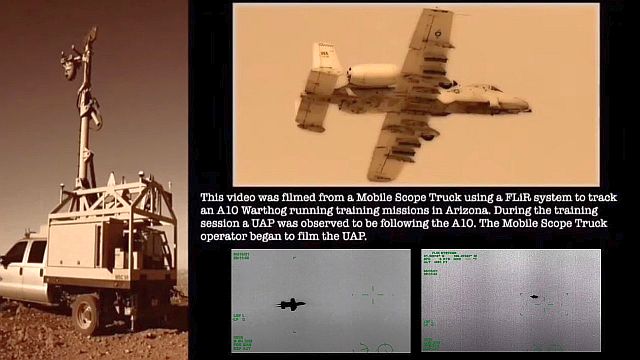 The object in question was analyzed and found to be an authentic UFO of unknown origin that exhibited advanced flight capabilities. The object in question came extremely close to the A10, during its routine flight, and began following and even catching up to the jet before changing direction.
The A10 seemed to have taken notice of the object as it eventually turned and circled the same area again. The unknown craft once again buzzed the A10 dangerously close before taking off in the opposite direction at high speeds.
Towards the end of the footage, as the FLIR operator was observing the craft, it suddenly accelerates at high speeds and flies out of sight.
UFO ufo and alien disclosure UFO cover-up ufo disclosure ufo videos 2021