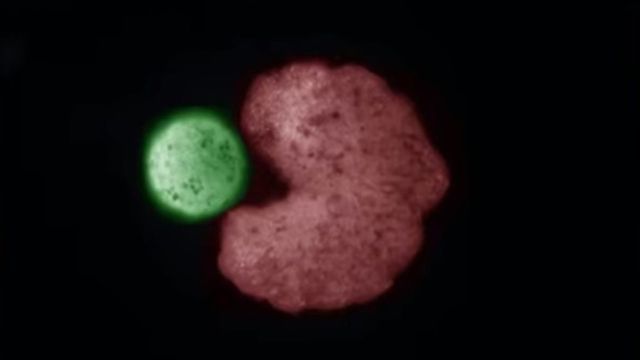 The Xenobots, computer-designed bio-robots, were adapted from frog stem cells and have now been programed to self replicate, spawning ‘babies’ from their Pac-Man-like mouths. Then these new Xenobots can go out, find cells, and build copies of themselves. Again and again.
They hope that the self-generating Xenobots could advance personalized drug treatment for cancers, traumatic injuries, birth defects, and other major health issues.
But is it the future of modern medicine? Technology futurist Ian Khan cautions against excessive optimism or excitement blinding us to the risks involved in the dawning technology. Robots that reproduce themselves 'aren't giant monsters — yet'
By creating these self-replicating "living robots," the scientists are essentially answering the idea that self-replicating alien probes, known as von Neumann probes, do exist.
These alien robotic probes could explore our galaxy and self-replicate themselves from interstellar dust and gas, after which the parent and child probes would each set off for a different star, where they would look for signs of life and then self-replicate themselves again.
Mathematicians in Scotland calculate that "self-replicating" alien spacecraft could already have explored our solar system and may still be here but undetectable to our current technologies.
According to some recent calculations, the massive new observational platform, The new Five-hundred-meter Aperture Spherical Radio Telescope (FAST) might be able to detect swarms of von Neumann probes relatively far away from the sun.
Currently, human civilization is thought to be around a .75 on the Kardashev scale which perhaps explains that we as humans are only just beginning to understand how to make new forms of self-replication products, and certainly don't have the technology yet how to make self-replicating 'Neumann probes' in space which according to Michio Kaku could be Nano Ships.
Video: the first living, AI-designed "Xenobots" that can self-replicate.