March 21, 2022
What is the chance that nearly identical objects fly past the sun following the same trajectory? It seems unlikely but it happened in 2019 and in 2022 again. 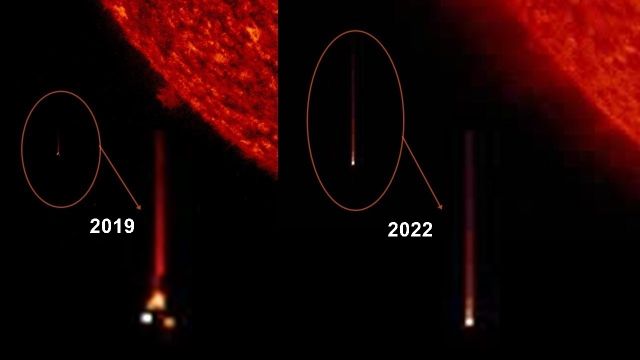 On 2019-10-14 a sun satellite captured a UFO passing the sun, then three years later on 2022-03-14, another sun satellite captured a similar UFO at the same spot next to the sun. That can't be a coincidence!
Furthermore, on 2021-12-17 NASA's satellite SDO AIA171 captured a cylinder-shaped UFO leaving the sun's surface at a tremendous speed, now, on 2022-03-02 NASA's satellite Proba 2 captured another UFO leaving the sun's surface at high speed.
It is not known why these alien craft come so close to the surface of the sun but it shows us that the aliens are using a technology so advanced that their ships may also withstand the heat of the sun.