May 10, 2022
On the evening of May 7, 2022 a rare red sky appeared in Zhoushan, Zhejiang Province. The local meteorological bureau of Zhoushan said that the red glow was simply the result of light, likely from fishing boats, reflecting of off low level clouds. 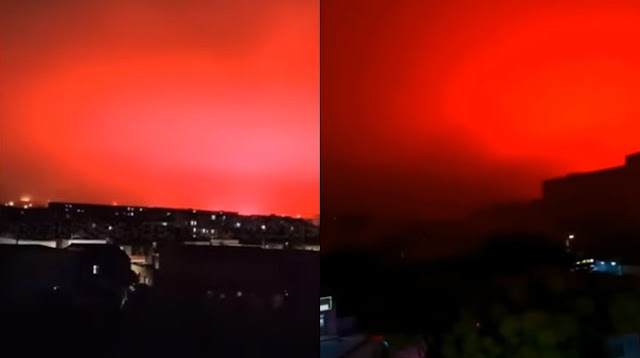 A blogger said that in 1770, there was a bloody sky for nine days in many countries. In 2017, Japanese scientists published a paper in Astrophysics express, believing that the bloody sky event in 1770 was caused by large-scale solar activity.
If it was the case of lights of fisher boats reflecting off low level clouds, then that should happen much more often and people would know and recognize it, but that is not the case here.
I think the red glow is more something like the 1770 event or it could be a test of some sort of (space) weapon.
An odd detail is that magnetic elements fell from the sky after the red glow which can be seen in the following video; it is clear that they cover it up for some reason.