on May 26, 2022
Using information from ESA’s Swarm satellite mission, scientists have discovered a completely new type of magnetic wave that sweeps across the outermost part of Earth’s outer core every seven years. 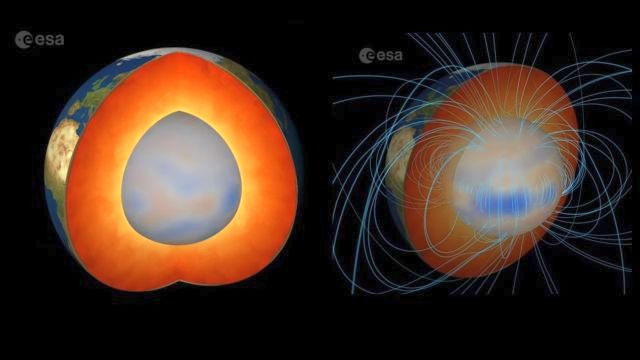 This fascinating finding opens a new window into a world we can never see. This mysterious wave oscillates every seven years and propagates westward at up to 1500 kilometers a year.
Magnetic waves are likely to be triggered by disturbances deep within the Earth's fluid core, possibly related to buoyancy plumes. Each wave is specified by its period and typical length-scale, and the period depends on characteristics of the forces at play. For magneto-Coriolis waves, the period is indicative of the intensity of the magnetic field within the core.
The research team suggests that other such waves are likely to exist, probably with longer periods – but their discovery relies on more research.
Read full story at ESA.
earth changes earth frequency Earth Grid earth's magnetic field earthquake lights hollow earth inner earth ocean inside earth