Tuesday, November 29, 2022
See footage below of the Orion spacecraft a little over an hour before its "outbound powered flyby burn" on Nov. 21, 2022. The spacecraft was less than 4,500 miles away (~7,242 km) and was traveling at 757 miles per hour (1218 kph). NASA's Artemis 1 Orion spacecraft aces close moon flyby in crucial engine burn.
During Orion's moon flyby it shows an oval shaped/egg shaped moon rather then the round-shaped moon as we know which is very strange, isn't it? 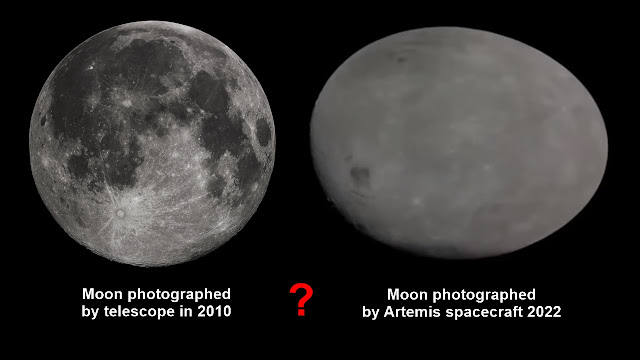 If you compare an image of the moon, photographed in 2010 from Madison, Alabama, USA, photographed with a Celestron 9.25 Schmidt-Cassegrain telescope. Acquired with a Canon EOS Rebel T1i (EOS 500D), with the moon image, taken less than 4,500 miles away from the moon, with the cameras on board of the Artemis 1 spacercaft then you come to the conclusion that these images are overexposed on purpose.
With overexposed moon images and an unusual oval-shaped/egg-shaped moon, we may wonder what they like to keep hidden from the public.
moon anomalies NASA ufo moon ufo moon base