Unknown space object (meteorite?) plunges into the sea near the Canary Islands

Wednesday, November 30, 2022
Translation from report diariodeavisos.elespanol.com: A possible meteorite has triggered the alarms in Gran Canaria on the afternoon of this Wednesday. According to official sources, it crossed La Palma, El Hierro, La Gomera, the south of Tenerife and passed through Gran Canaria, to end up plunging into the sea, on the north coast, between the municipalities of Arucas and Guía. 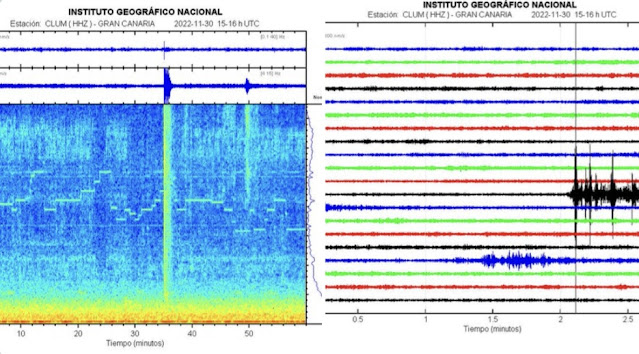 The loud noise generated by the trajectory of the meteorite triggered alarm among the population in different parts of the island, with special emphasis on the Santa Brígida area, where it was even thought of a landslide. The subsequent fire in an area of the municipality suggested that it was due to the impact of the meteorite, something that was later ruled out.
When it entered the Canarian sky, a luminous object of an intense red color was seen and then a trail of smoke. He crossed the western islands in the direction of Gran Canaria.
The alert began at 3:39 p.m. this Wednesday, at which time dozens of people have called 112 reporting "tremors" of origin yet to be identified. According to the sources of the emergency service, they have not had to intervene for the moment and are collecting information about the incident.
"I do not know the origin, but the tremor was quite important. Not only windows, the floor and walls trembled and in the background a sound like a distant explosion," said Twitter user @meteograncanaria.com
The National Geographic Institute has registered the shock, but still does not specify the origin. The authorities are trying to find out the cause of the great noise that this Wednesday keeps Gran Canaria in suspense .
Although it is believed to have been a meteorite, this has not yet been proven. It is said to have been a 3-foot-long object that would weigh many tons. Such an object would cause a huge tidal wave when it crashes into the sea and that does not seem to be the case here. So, was it a meteorite or could it have been something else that crashed into the sea?
Twitter page below: The great roar this afternoon in Gran Canaria was not produced by any earthquake. At our seismic stations we see the noise of some kind of unknown explosion. What we see is sound. Therefore, this is outside of our competences