Friday, December 02, 2022
48,500 years old Zombie Virus Resurrected In French Lab..As the world warms up, vast tranches of permafrost are melting, releasing material that's been trapped in its icy grip for years. This includes a slew of microbes that have lain dormant for hundreds of millennia in some cases. 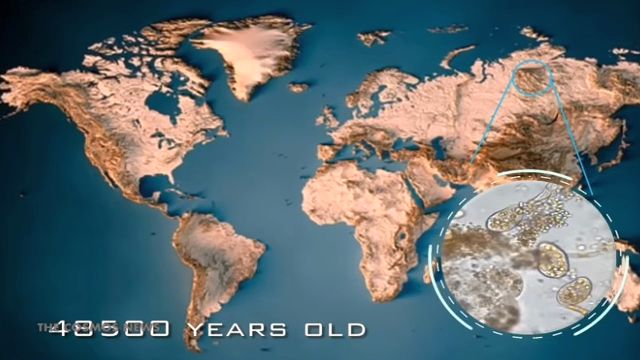 To study the emerging microbes, scientists have now revived a number of these "zombie viruses" from Siberian permafrost, including one thought to be nearly 50,000 years old – a record age for a frozen virus returning to a state capable of infecting other organisms.
The team behind the work, led by microbiologist Jean-Marie Alempic from the French National Centre for Scientific Research, says these reanimating viruses are potentially a significant threat to public health, and further study needs to be done to assess the danger that these infectious agents could pose as they awake from their icy slumber.
"One quarter of the Northern Hemisphere is underlain by permanently frozen ground, referred to as permafrost," write the researchers in their paper.
"Due to climate warming, irreversibly thawing permafrost is releasing organic matter frozen for up to a million years, most of which decompose into carbon dioxide and methane, further enhancing the greenhouse effect."
The 48,500-year-old amoeba virus is actually one of 13 outlined in a new study currently in preprint, with nine of them thought to be tens of thousands of years old. The researchers established that each one was distinct from all other known viruses in terms of their genome.
While the record-breaking virus was found beneath a lake, other extraction locations included mammoth wool and the intestines of a Siberian wolf – all buried beneath permafrost. Using live single-cell amoeba cultures, the team proved that the viruses still had the potential to be infectious pathogens.
We're also seeing huge numbers of bacteria released into the environment as the world warms up, but given the antibiotics at our disposal it might be argued they would prove less threatening. A novel virus – as with SARS-CoV-2 – could be much more problematic for public health, especially as the Arctic becomes more populated.
"The situation would be much more disastrous in the case of plant, animal, or human diseases caused by the revival of an ancient unknown virus," write the researchers.
"It is therefore legitimate to ponder the risk of ancient viral particles remaining infectious and getting back into circulation by the thawing of ancient permafrost layers."
This team has form for diligently digging up viruses in Siberia, with a previous study detailing the discovery of a 30,000-year-old virus. Like the new record holder, that was also a pandoravirus, a giant big enough to be visible using light microscopy.
The revived virus has been given the name Pandoravirus yedoma, which acknowledges its size and the type of permafrost soil that it was found in. The researchers think there are many more viruses to find too, beyond those that only target amoebas.
Many of the viruses that will be released as the ice thaws will be completely unknown to us – although it remains to be seen how infectious these viruses will be once they're exposed to the light, heat and oxygen of the outdoor environment. These are all areas that could be investigated in future studies.
Virologist Eric Delwart from the University of California, San Francisco, agrees that these giant viruses are just the start when it comes to exploring what lies hidden beneath the permafrost. Though Delwart wasn't involved in the current study, he has plenty of experience resuscitating ancient plant viruses.
"If the authors are indeed isolating live viruses from ancient permafrost, it is likely that the even smaller, simpler mammalian viruses would also survive frozen for eons."
ancient history virus zombie